Forbes has come out with yet another real estate “Top 10” list, this time gabbing on about the “Top Home Sellers’ Markets.” Interestingly, Seattle is conspicuously absent from the list. They explain:

The Methodology
To measure inventory glut, we used Moody’s Economy.com and National Association of Realtors data that tracked a market’s current sales rate by projecting the amount of time it would take to sell off the excess housing stock at the current rate of sales.

We also looked at the change in sales rate over the last year to measure the relative tightening or loosening of the market. Finally, a measure of price stability was applied so as to prevent the list from being a rundown of upstart markets.

The measurements left out a few cities that lacked comprehensive data. Seattle, for example, has incredibly strong market fundamentals—the lowest vacancy rate of major metros at 0.9% and is a small geographic area not conducive to overproduction. It is a good seller’s market, but for tracking what we were after, Seattle data was incomplete for our analysis.

I’m not sure why their data was “incomplete” for Seattle, and I imagine that if they had access to everything they were looking for, it probably would have been on their list. However, while Seattle might be a better sellers’ market than most of the country, all indications are that we have been granted only a temporary reprieve.

While the language in the article makes their calculations sound fancy and complicated, it would appear that their primary measure of whether a city has a good “sellers’ market” comes by dividing the total monthly sales by the current number of homes for sale. This is commonly referred to as “months of supply” (MOS), but they are referring to it as the “rate of sales.” Here’s a graph of King County’s SFH from 2005 to the present: 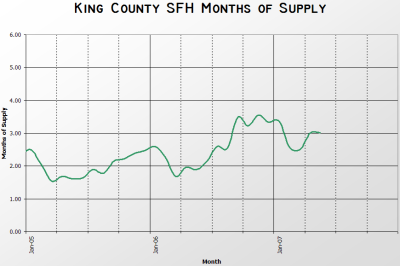 Forbes mentions that they “also looked at the change in sales rate over the last year to measure the relative tightening or loosening of the market.” As you can see, the Seattle market can only be described as “loosening.” At the end of May, MOS stood at 3.02, up 59% from last May’s value of 1.89, which was itself up 18% from the May 2005 value of 1.61.
Sales have been declining at an average rate of 10% year-to-year for the past 19 months: 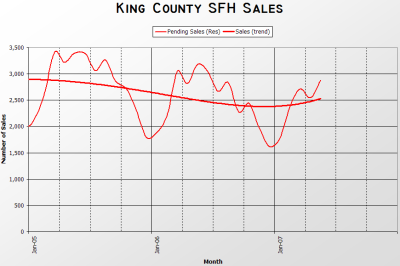 While inventory has been increasing by over 24% year-to-year for over a year: 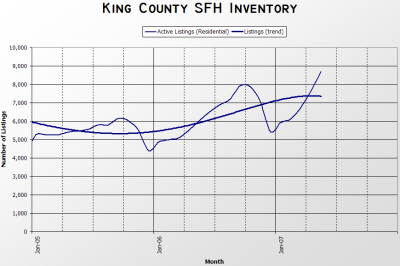 “Outlook not so good.”