Just a quick note to point out the NWMLS has released July stats. Compared to 2006, listings are up 44%, and sales down 8%.

Here’s the link to the NWMLS press release, with a link to the recap pdf (which is no longer directly-linkable).

My brothers are in-town visiting, . Here is the promised update:

As of July, there have now been 20 of the past 21 months that have clocked in with YOY decreases in pending sales. Inventory has been increasing YOY for 16 months in a row, and has now been at over 20% YOY for a full year. For some perspective on those numbers, consider that since the peak of Seattle’s market activity in March 2005, inventory has nearly doubled, with a total increase of 90%, while sales have dipped a total of 28%.

Median prices spiked over $10,000 from June—an unusual month-to-month jump. Not since the late ’90s has June to July seen that large of a jump. In the past I’ve been somewhat skeptical of the “low end buyers have stopped buying” explanation for an increasing median in Seattle, but I think we may finally be seeing that effect in these latest price statistics. I’ll be looking into this one to see what I can find.

For the second month in a row, months of supply jumped up half a point, coming in at over 4.0 for the first time since the winter of ’02-’03 (and the first time ever for July—since 2000, as far back as I have the metric).

Like some kind of unstoppable robot, carrying out preprogrammed directives, I have uploaded an updated copy of the Seattle Bubble Spreadsheet that contains the relevant data. 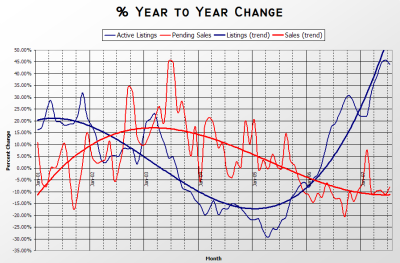 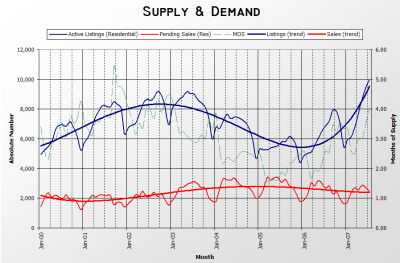 Here’s the graph of YOY percent change in the median sale prices of single-family homes in King County since 1994: 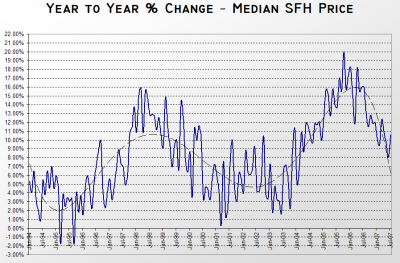 Here are a few links to the local news write-ups. A post centered on these will be up tomorrow.