Picked this up from Aubrey Cohen’s blog. Lawrence Yun, Chief Economist for the NAR and well-known real estate seer has confirmed what our local press and real estate folks have know for years: Seattle really is special! It’s about jobs and Microsoft millionaires. Why didn’t we think about that?!?!

“If anything, middle America appears to be under priced,” he said.

Some coastal cities where the payments and incomes are less in balance may be overpriced, Yun said.

An article in Fortune magazine recently predicted Seattle housing prices would fall 19.5 percent in five years, while rents would increase 19.2 percent, to bring prices and rents back into their historic relationship. (See this story.)

But it’s also possible that some are joining the ranks of international cities like London, Paris, San Francisco and New York, where costs are less tied to incomes, he said. “Now I’m beginning to think: Miami, Seattle, are they becoming superstar markets?”

Now remember, this is from the guy who has provided the following forecast of Pending Sales – in which even when he possessed 9 of the 12 months of data, he still couldn’t get the annual forecast right… (Chart courtesy of Paper Economy) 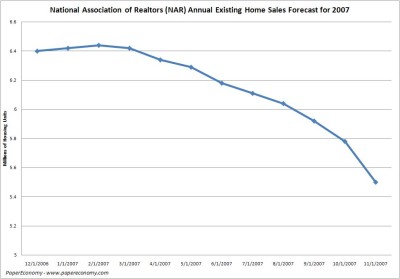 Addendum by The Tim:

Elizabeth Rhodes also made sure to point out the “superstar” quote as well. It’s also worth mentioning that this “superstar” thing seems to have become a yearly ritual. The first sighting of the label came a mere month after I started the blog, in September 2005. Then it was repeated a year later in October 2006.

It’s really just a variation on the refrain that Seattle is becoming a “world class city,” a claim that we’ve addressed here before, and I still don’t buy. Seattle’s nice, but it can be both a nice city and stupidly overpriced at the same time. In fact, I contend that is exactly what it is.