It’s been a while since I posted any anecdotal observations, so I think it’s time for a few. 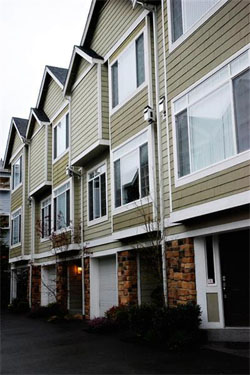 First up, the 8-unit condo/townhome complex in my neighborhood, which we have visited a few times before. Here’s the summary of the action in this complex of eight essentially identical units since 2005:

This latest listing has an asking price 20% higher than any unit in this complex has ever sold for, and 28% higher than this specific unit sold for just over two years ago. We’re talking Kenmore here, which is not exactly “close in,” but not really the boonies either, so this should make an interesting test of how soft the condo market is outside the downtown cores of Bellevue and Seattle.

Personally, I doubt they’ll get more than $320,000, if even that. They may well just pull it off the market when they can’t get their fanciful price. According to Estately, there are 47 condos on the market in the 98028 zip code right now (after eliminating duplicates). This townhome is priced higher than 78% of the competition, and for just $30,000 more, you could get a pretty nice view. Good luck friend, you’re going to need it.

The second anecdotal update is much shorter. Just a quick note to point out that the sellers of my favorite million-dollar home over on Avondale have dropped the price twice now since listing in December at $1,650,000: once to $1,590,000 in March, and again to $1,550,000 a few weeks ago.

They paid $1,275,000 in February last year, and if they don’t get more than $1,385,000, they won’t even make enough to cover agent commissions and excise tax. I have a feeling this will be sitting on the market even longer than the nine months it languished last time.