Almost a year ago, a family that has accumulated ownership of 13 near-contiguous acres of downtown real estate in the Denny Triangle finally put the whole lot of it on the market. 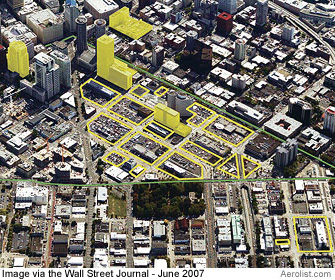 Mr. Clise is convinced now is the ideal time to sell. The job-market outlook is robust for Seattle, and the office market, with a low 5% vacancy rate for top-quality “Class A” buildings, is hungry for more space, says Michel Seifer, managing director of capital markets for Jones Lang LaSalle, the real-estate-services firm handling the sale.

Yet, there is a possibility that Mr. Clise, age 57, may have missed his window. Increases in the cost of borrowing — with the yield on the benchmark 10-year Treasury note rising to nearly 5.25% last week — could keep some previously active real-estate investors on the sidelines for this blockbuster, but inherently risky, transaction. Mr. Clise says if he doesn’t get the price he is seeking for the land — well into the hundreds of millions of dollars — he could still take it off the market.

Well, as reported by the Wall Street Journal yesterday (subscription), and picked up by the Seattle Times and Seattle P-I today, it looks like they were indeed a bit too late:

In retrospect, Clise said, the family should have begun marketing the property a year earlier, before the credit crisis deepened.
– Seattle Times

“The changes in the financial market are causing the capital for doing deals to be out of sync with the value of the real estate right now,” he said.
– Seattle P-I

Does anyone here deal a lot with commercial real estate? Have you seen a significant slowdown there, too? Or was the failure of this deal more a result of its massive size?