Foreclosures are still on the rise in Washington State and in the Seattle area, according to the Seattle Times.

Washington state foreclosure filings were up 69 percent last month compared with the previous June and up almost 10 percent from May, as the mortgage meltdown continues despite government and private efforts to help struggling homeowners.
…
There were 2,742 new filings statewide last month, a 155 percent increase over new filings in June 2005.

Of the three Central Puget Sound counties, foreclosures again hit Pierce County hardest, with one in 483 households in trouble. In Snohomish County, it was one in every 966.

King County fared best, with one household in 1,265 in trouble.

Here’s a chart of King and Snohomish foreclosures since late 2006, courtesy of data collected by the Bubble Markets Inventory Tracking blog: 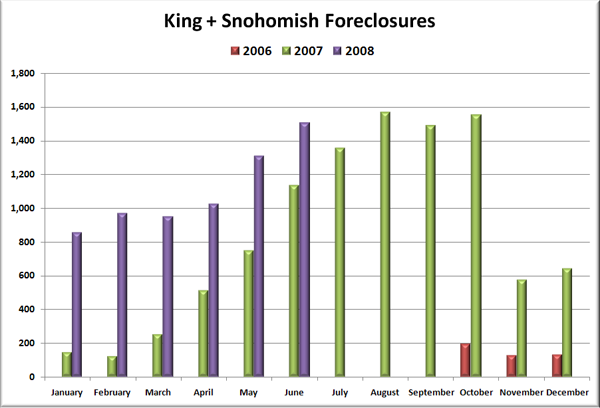 Are foreclosures skyrocketing? No. This is because for the most part, foreclosures are a trailing indicator, rising significantly only after consistent price declines set in. If prices around Seattle continue to drop as they have since late last year, I expect that foreclosures will begin to rise significantly.