There has been some discussion in the comments over the weekend about whether or not the current home price boom in the Seattle area is “unprecidented.” We have already explored the long-term home price trends in King County going back to 1946, but I thought it would be instructive to look at the data in a slightly different way.

The following chart shows King County’s three major home price booms since the 1970s. The indices are based on King County SFH prices adjusted for inflation using the CPI. For each boom, home prices are indexed to 100 at the start of the boom. 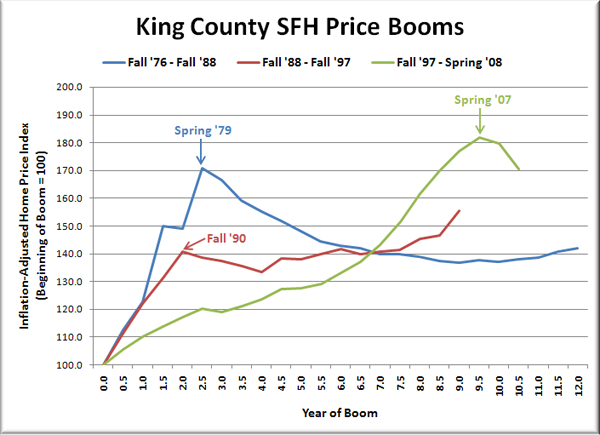 Here’s a breakdown of the three cycles depicted above:

Note that after the 2.5-year ’76 to ’79 boom there was a period of nine years of stagnant / declining home prices. With a larger increase and a longer run-up, it seems quite possible that the fallout from the current boom will last even longer. 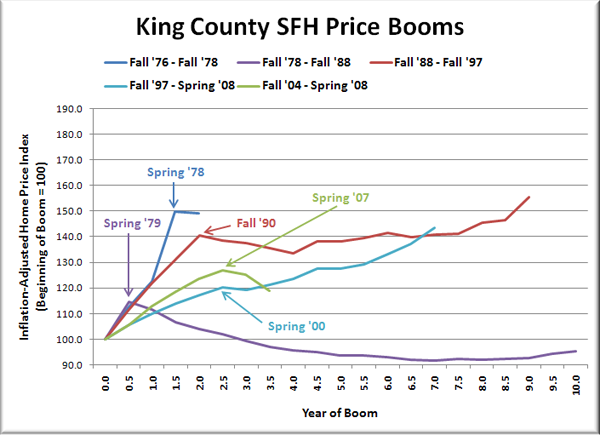 In this version you have:

Basically, defining the end of the boom in this way splits the blue and green lines from the original chart into two separate boom/bust cycles each. That results in the odd apparent consequences of a 9.5-year bust following a mere 6-month 15% price increase, and a “bust” that is actually a strong showing of price increases, totaling a gain of 19% in just under 5 years. Neither of those make any sense.

So, unless you believe that the nonsensical second graph is a better representation of King County’s home price booms, the current boom is indeed unprecedented.