Here’s an updated look at our supply and demand situation, indexed to 2000. 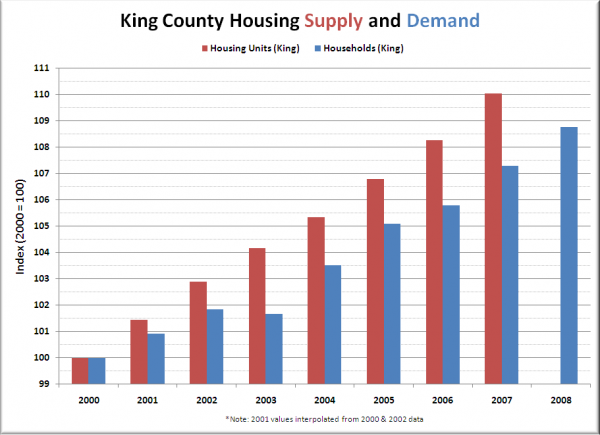 Unfortunately, supply data for 2008 will not be released until August, and in reality construction of new housing units did not come to a complete stop after July 2008, so we will undoubtedly still be sitting on a housing oversupply.

What amazes me is that even in the current economic and lending environment, I am still seeing plenty of in-progress new construction, even including batches of those nasty compact townhomes that have become such a blight on some Seattle neighborhoods.

Running some quick numbers, if the population growth rate holds steady, and the construction of new housing units drops by 25% of the 2000-2007 average, it will take until 2017 before we work through the oversupply.

If new construction drops by 50%, we absorb the oversupply by 2012.

If new construction drops by 75%, we absorb the oversupply by 2010.

Keep in mind, that these figures merely state how long it will take us to get back to roughly the same overall housing vacancy rate we had in 2000, which was by most measures a relatively balanced market. Once we work through this oversupply, it is not likely that double-digit appreciation is going to spring back up out of nowhere, unless new construction has completely halted and stays that way for year after year.

So the big question is, how much has new construction really dropped by in the Seattle area? Are we looking at two years of an oversupplied housing market, or eight?