A reader wrote in requesting an update to this February post, in which I criticized Nancy Pelosi’s misleading chart of job losses.

Here’s an update to the post-WWII job loss chart, courtesy of Calculated Risk, in which I’ve added a mark so you can see where the “stimulus” was passed. 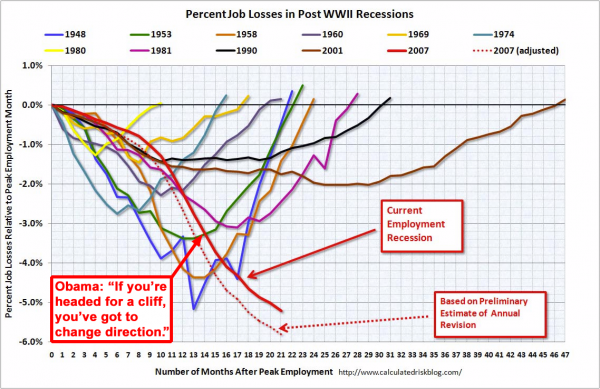 Wow, good thing we changed direction to the tune of $787 billion*, huh?

*(Actual cost: much, much more)

If there is any doubt about who the stimulus was really directed at saving, just take a look at an update to the stock market crash comparison: 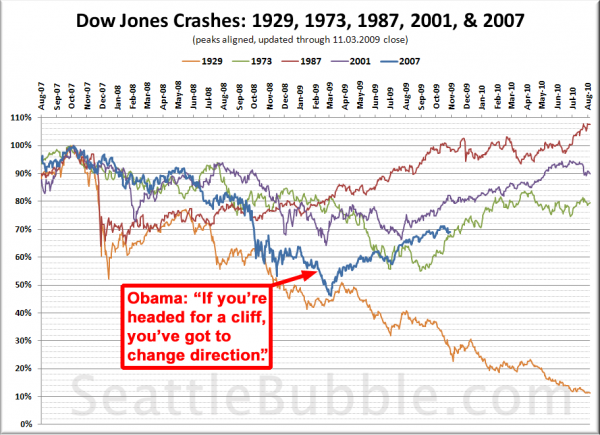 The Senate and House are poised to agree on a compromise measure to extend unemployment benefits that also would expand a popular $8,000 tax credit for homebuyers, despite a recent government report on extensive mistakes and suspected fraud in the program.

The Senate might pass its version as early as Wednesday, and aides to Congressional leaders say the House could accept it this week, sending the bill to President Obama to sign into law. After weeks of partisan delay in the Senate, Democrats are eager to show progress before Friday, when the October jobless report is again expected to show high unemployment.

Super! So while people continue to lose their jobs, and absolutely zero of the underlying problems in the economy have been fixed, let’s pour another ten or twenty billion dollars into the housing market to try to keep prices propped up (i.e. – keep homes as unaffordable as possible) a little longer so our buddies in the big banks that got us into this mess can avoid taking losses.