Let’s have a look at the latest data from the Case-Shiller Home Price Index. According to April data,

Last year prices rose 0.2% from March to April and year-over-year prices were down 16.8% (the largest YOY decrease on record).

Looks like we finally get to see the expected little price boost out of the expiring homebuyer tax credit. Unlike most other cities tracked by the Case-Shiller index, Seattle has been mostly flat since the credit was introduced early last year. However, with the for-real-this-time-we-really-mean-it expiration date of the tax credit finally upon us, it is not surprising to see that some buyers rushing to get their free $8k have pushed home prices up just a bit (about 1%).

Here’s our offset graph—the same graph we post every month—with L.A. & San Diego time-shifted from Seattle & Portland by 17 months. All four cities climbed a little more month-to-month in April, with Portland actually grabbing the biggest gain for a change. Year-over-year, Portland came in at -0.4%, Los Angeles at +7.8%, and San Diego at +11.7%, still all better than Seattle. 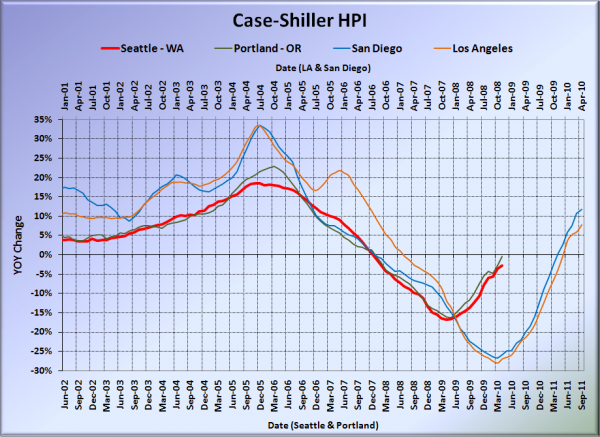 In April, seventeen of the twenty Case-Shiller-tracked cities experienced smaller year-over-year drops (or saw year-over-year increases) than Seattle (one more than March):

Here’s an interactive chart of the raw HPI for all twenty cities through April. 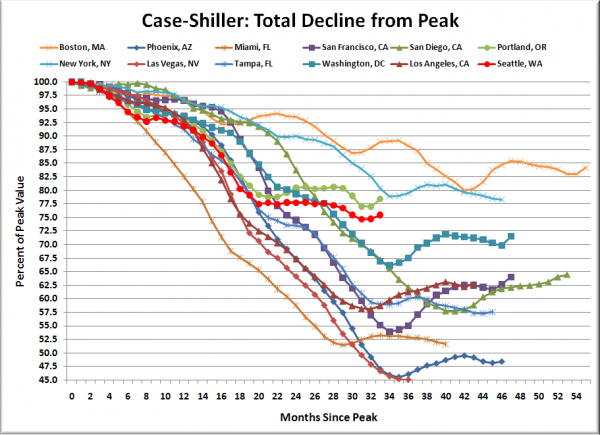 In the thirty-two months since the price peak in Seattle prices have declined 24.5%, slightly less than last month. 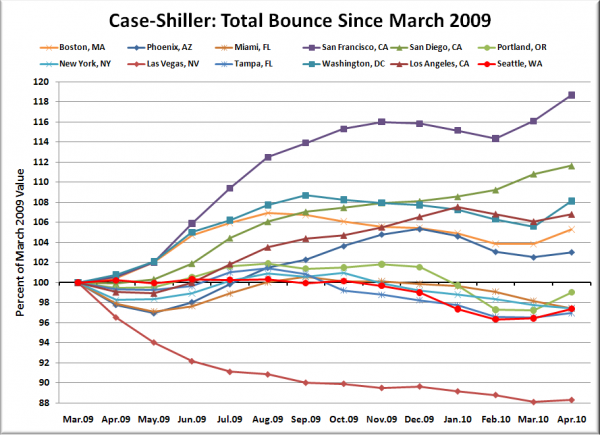 Looks like the impending expiration of free money was enough to squeeze out a little boost in most markets.