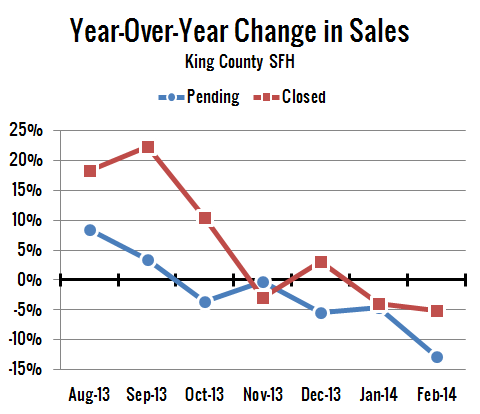 Northwest Multiple Listing Service brokers reported 507 fewer pending sales during February than the same month in 2013, but members believe the 6.5 percent decline isn’t due to a shortage of buyers. “If we just had enough homes to sell we would easily be outpacing last year’s pending numbers,” said Mike Gain, CEO and president of Berkshire Hathaway HomeServices Northwest Real Estate. “Locally, we are literally starving for inventory,” he added.
…
Another industry leader pointed not only to a “severe shortage of homes for sale” in the most sought-after price ranges, but also to the fan frenzy surrounding the Seahawks as a factor in the setback of sales. “The Seahawks’ run to the Super Bowl affected sales,” reported J. Lennox Scott. Since the Super Bowl Championship game, he said listing activity has picked up, resulting in brisk sales activity for the new, but still limited inventory.
…
The smaller selection is resulting in bidding wars for well-priced homes in some neighborhoods. Multiple offer situations are common in local markets with less than four months of inventory, according to Dick Beeson, principal managing broker at RE/MAX Professionals in Tacoma and a member of the Northwest MLS board of directors. He noted traffic has been “very good” at open houses. “These are harbingers of a medium- to fast-paced spring and summer selling seasons,” he suggested.

I just can’t comprehend why the NWMLS would choose to put that nonsense from Lennox so prominently in their press release. Do they really believe that there were people in January and February who thought to themselves… “Well honey, I know we were planning to buy a house this month, but gosh darnit, we’re just too busy watching football on Sundays! I guess we’ll just have to wait until March.” It is ridiculous on the face of it.

As I pointed out yesterday, the weakness in sales is not new nor is it just a local phenomenon. As you can see in the chart above, both pending and closed sales have been getting consistently weaker since August or September. To claim that the Seahawks had anything to do with February sales coming in lower than last year is absurd.

The area’s housing market hit a lull in February, with the second consecutive monthly slide in home sales and median prices.

Blame the Super Bowl. Or the Winter Olympics. Or Mercury retrograde.

Housing-market pundits searched for clues Wednesday in new data from the Northwest Multiple Listing Service to explain why the median price of single-family homes sold in King County in February fell to $405,400 from $410,000 in January amid little growth in the number of homes for sale.
…
“The Seahawks’ run to the Super Bowl affected sales,” suggested J. Lennox Scott, chairman of John L. Scott Real Estate, in a statement put out by the MLS. Since the championship game, he said, more homes have been listed and sold.

An even bigger factor was the continued tight inventory of homes for sale, said Glenn Crellin, associate director of research at the University of Washington’s Runstad Center for Real Estate Studies. King and Snohomish counties had less than a four-month supply of homes for sale, making it a seller’s market.

Thanks once again to Glenn Crellin for bringing some sanity to the discussion.

Why were sales down countywide? A continued lack of inventory is one suspect.

“If we just had enough homes to sell we would easily be outpacing last year’s pending numbers,” Mike Gain, CEO and president of Berkshire Hathaway HomeServices Northwest Real Estate, said in a listing service news release. “Locally, we are literally starving for inventory.”

Glenn Crellin, associate director for research at the University of Washington Runstad Center for Real Estate Research, said the uptick in inventory makes this factor “a little bit less relevant than it has been in previous months,” although: “It’s still very tight, no question about it.”

“The Seahawks’ run to the Super Bowl affected sales,” he said in the news release, adding that activity has picked up since the big game.

It couldn’t be low inventory, rising interest rates, or rising prices… must have been the Seahawks! Yeah!

Pending sales for homes and condominiums in Snohomish County dropped in February from the same month a year ago, according to numbers released Wednesday by the Northwest Multiple Listing Service.
…
While there is a shortage of homes for sales, many potential home buyers stayed home glued to their televisions during the weekends in January and early February, said J. Lennox Scott, chairman and CEO of John L. Scott Real Estate.
…
With higher prices, more people will be willing to sell their homes this year, said John Deely, the Northwest MLS director and a principal managing broker at Coldwell Banker Bain in Seattle.

I wonder if Mr. Deely would care to explain exactly what measures he’ll be using to quantify this “phenomenal year.” Also, it’s great to see real estate reporting reappear in The Herald.

Pierce County home sales fell in February, the second consecutive month in which sales have cooled after an earlier red-hot period for the market, new data released Wednesday by the Northwest Multiple Listing Service show.

Last month, sales fell 3 percent to 692 units from 714 units in the same period a year ago, the combined single-family residence and condo data show.

The News Tribune was the only article this month not to quote that Seahawks nonsense from J. Lennox Scott, but that’s probably just because the entire article is only about twice as long as what I’ve quoted here.

As far as I could tell, there was no story in The Olympian this month, but recently when there has been it’s just a copy of the News Tribune story anyway.