Gene Balk posted an interesting piece on the Seattle Times last week that explores how the number of low, middle, and high income households have grown or shrunk around King County since 2000: 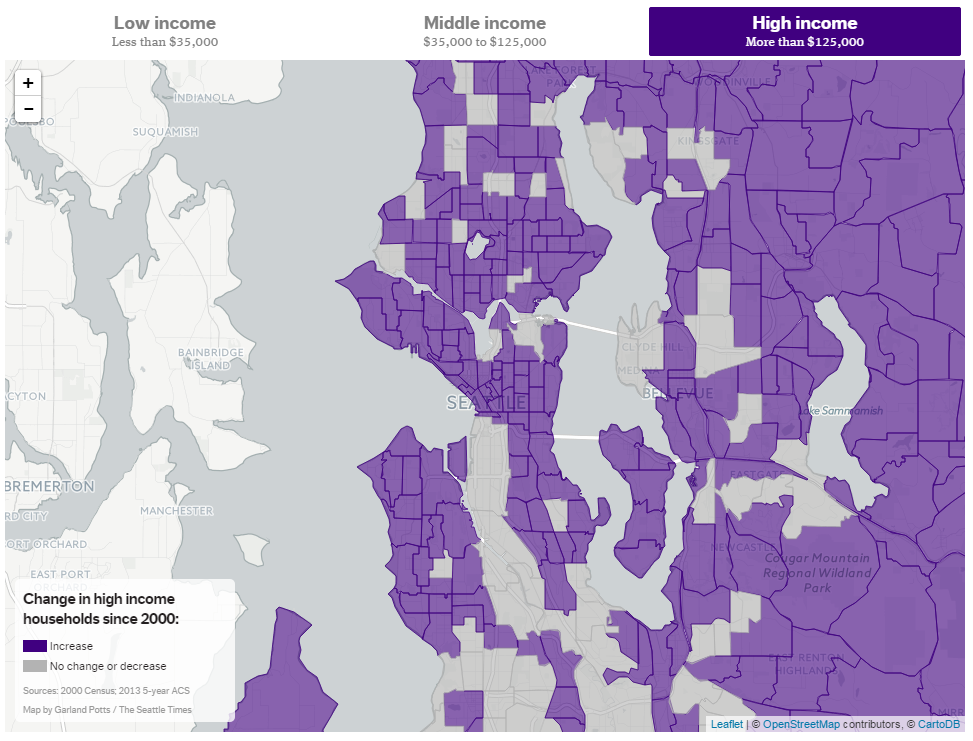 The map is cool (click through to the article for an interactive version), and Gene’s overall point is interesting (that the middle class is stagnating while low and high income households are both increasing), but this is the part that jumped out to me as particularly relevant to the local real estate market:

investment returns — which many of the ultrarich live on, rather than salaries — are excluded from household-income calculations by the Census Bureau

Strong increases in high income households will certainly drive up home prices, but I think investment returns may be causing some of the recent disparity between incomes and home prices. The Seattle area is strong market for tech and startup jobs where equity is a big part of compensation. Since this equity is not considered in median or per-capita income data it stands to reason that when the stock market (and in particular the tech market) is doing well local home prices are likely to rise more quickly than local incomes.

Unfortunately no good data exists (that I know of) on the source of money that poeple are using to buy homes. There is data on all-cash purchases, but our last look at that data (through 2011) showed that most of those were focused on the low end of the market, probably mostly rental investment properties or flips. The best proxy I can think of would be to look at what percentage of homes are being bought with more than twenty percent down, but not all-cash. I would hypothesise that those purchases are likely to represent people buying expensive homes to live in with the help of a large investment return.

Two thirds of the 31 percent that Seattle-area home prices fell after the bubble (per Case-Shiller) came between November 2007 and March 2009, when the Nasdaq fell 54 percent. I think it’s likely that good times in the tech stock market has a greater effect on Seattle-area home prices than most other areas (the Bay Area being the other obvious candidate for such a correlation).

I’ll be digging into this to see what kind of data I can dig up on this topic. Let me know if you’ve got any ideas in the comments below.