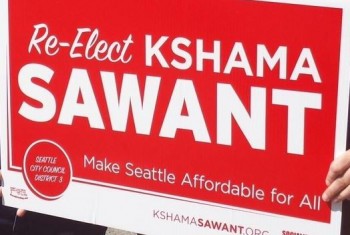 I drove down to Leschi last weekend, and I saw a surprising number of yard signs promoting the re-election of Kshama Sawant to the Seattle City Council. As you can see in the photo at right (taken from her campaign’s Twitter feed), the slogan on these signs implies that Sawant’s main goal is to “Make Seattle Affordable for All.”

It’s not explicitly stated, but since most people aren’t referring to the price of food or clothing when they complain about a specific place being unaffordable, I think it’s safe to assume that Sawant is talking about housing affordability—probably mostly focusing on rentals. I was very curious how she intends to “make Seattle affordable,” so I headed over to her campaign website to read her measured, thoughtful opinions on this economic conundrum.

Let’s have a look at her “issues” page on the “Make Seattle Affordable for All” topic:

Our city is becoming increasingly unequal and unaffordable. In one Seattle, glittering fortunes are being made for the super–rich and the major corporations that dominate its landscape. The other Seattle, where the rest of us live, faces skyrocketing rents and underfunded services.

I think most people will agree with this sentiment, at least on a high level. I mean, it’s blatantly populist and I don’t think the “us versus them” mentality is a particularly productive form of politics, but at least she’s on-topic so far.

While the Mayor and City Council give sweetheart deals to billionaire developers, we’re left with “stakeholder” committees and empty promises.

All right, what exactly are these “sweetheart deals” that the “billionaire developers” are getting from the Mayor and City Council? Can you cite them specifically?

Instead of investing in desperately needed mass transit, this same arrogant political elite is doubling down on the Bertha boondoggle, threatening to rack up hundreds of millions of dollars in cost overruns while safety concerns mount.

Wait. Hold on. I thought we were talking about housing affordability. You know, “billionaire developers” and whatnot. What does the Highway 99 tunnel fiasco have to do with this? Please explain the connection.

The political system in our city and throughout the country is beholden to corporate cash. A Republican-controlled Congress brazenly champions the interests of Wall Street. Here in Seattle, where the Democratic Party has governed for decades, big developers and downtown business interests nonetheless dominate city politics.

I am starting to get the feeling that she is not even going to attempt to explain how she hopes to address affordability on this page titled “Make Seattle Affordable for All.”

I am committed to building an alternative to this model of corporate politics. We need political representatives who are independent of corporate cash and corporate parties, who will give voice to the needs and aspirations of working people.
…
In line with the principles of the political party I represent, Socialist Alternative, I pledged to stay accountable to working people by taking only the average worker’s wage. Seattle City Councilmembers pay themselves $120,000 per year – the second highest amount of any city council in the country. Inevitably, such a salary removes councilmembers from the realities of life for poor and working people.

I only accept $40,000 per year after taxes. This amount is roughly the full-time take-home pay of an average Seattleite. The remainder of my salary goes to a Solidarity Fund to help build social justice movements.

And that’s the end of this page on her site. I am rather curious if she is really living on just $40,000 a year, since the mortgage payment on the house she bought last year and refinanced a few months ago would likely eat up about half of her $3,333 monthly pay. But I digress.

If you click through to the fourth page of the “Issues” section of her campaign website, you finally come to a page titled “Affordable Housing for All.” Maybe we’ll have better luck learning her plan here.

Seattle is facing a severe housing crisis and District 3 is at its epicenter. The for-profit housing model is not working, with big developers and speculators pushing workers and even middle-class families out of the city. Meanwhile, the City Council is working on behalf of big business rather than ordinary renters and homeowners.

This sounds more promising. We’re finally getting to the meat of her plan to “Make Seattle Affordable.” Here is what appears to be the crux of her plan:

I’m not going to go over every one of these points, but I do want to address a few of them.

At the top of her list is rent control—the idea that the government can just dictate a ceiling on rent prices or rent increases. Despite being totally illegal here in Washington State, rent control definitely makes for great hashtags and soundbytes. Unfortunately, economists are near-unanimous in their agreement that rent control does not work. You can read study after study after study after study and they all say more or less the same thing. The really strange thing here is that Sawant has a PhD in Economics. This is something that she should understand better than most people.

Sawant also says that the city should “implement a principal reduction program for underwater homeowners.” This too is a terrible idea. If you took out a mortgage that you can’t afford to pay back, there already exists a “principal reduction program” for you: either sell the home or walk away and give it to the bank. The city should not be in the business of bailing out bad borrowing decisions.

Her plans to improve tenants’ rights and build more homeless shelters both seem relatively reasonable, and will definitely help some people. But it’s her suggestion for “building thousands of housing units” that really comes closest to a solution that would actually help make Seattle more affordable. The housing market is subject to supply and demand. Prices are currently rising sharply because demand is increasing more quickly than supply.

You can solve this basic problem in one of two ways: Decrease demand or increase supply. Building lots and lots of new housing units so that supply can catch up to demand is the only reasonable way to address affordability. Now, I’m not sold on Sawant’s suggestion that these units should be city-owned and “rented at below-market rates,” but she does at least get close to the actual solution to the affordability problem with this proposal.

It doesn’t have the same populist appeal as rent control, but dramatically increasing housing supply is something that would actually work, and if Sawant really wants to “Make Seattle Affordable for All,” that is where she should be focusing her energy.