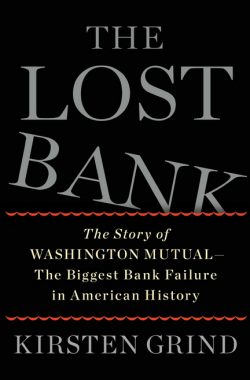 Longtime readers or followers of Seattle real estate and/or local business may remember Kirsten Grind, a local reporter with the Puget Sound Business Journal who reported extensively on the latter-day problems and eventual failure of Washington Mutual. Before leaving Seattle for New York to work for the Wall Street Journal, Kirsten put over a year […]

Apparently, this is what “an unprecedented level of openness in Government” looks like: Via Kirsten Grind at the Puget Sound Business Journal. The Puget Sound Business Journal for months has asked the Office of Thrift Supervision (OTS), the federal agency that regulated Washington Mutual, to release internal communications between WaMu’s regulators. … On Wednesday, an […]

On Friday the Puget Sound Business Journal posted another great piece by Kirsten Grind on all the shady dealings that went on behind the scenes in the WaMu shutdown ordeal. The piece, titled The Washington Mutual decision is currently available on their site only to subscribers, but over on Portfolio.com (one of their sister sites) […]

Got a few interesting stories for you today. First up, from the Puget Sound Business Journal: Seattle, Bellevue luxury condominium towers are slow to fill up Three-quarters of the new condos at five major buildings in Seattle and Bellevue are unsold, leaving developers in a high-stakes battle to unload millions of dollars worth of homes. […]

The last few days have seen a handful of articles in the local press on the subject of the strength (or lack thereof, as it turns out) of local banks. Here’s a brief summary. First-up is a relatively in-depth look at the status of dozens of banks based in Washington State: Washington’s banks under stress […]

Photo by The Tim The official layoff count for WaMu was made public today. According to various news sources, JPMorgan Chase will be cutting 3,400 jobs in Seattle. JPMorgan Chase is laying off 3,400 Washington Mutual employees in Seattle, according to spokesman Tom Kelly. That’s more than 80 percent of the 4,300 people it employs […]