In a discussion last month where we discussed the relationship between gas prices and home purchase decisions, I made the following assertion:

In the last few days I’ve run across a few news articles that again make the contrary claim that “fuel prices are driving major changes in the way U.S. residents live,” so I thought I’d revisit this topic. Here’s one such story from The Boston Globe. Locally, The Olympian had a similar story: Homebuyers look to cut commutes and fuel cost:

South Sound homebuyers are looking for houses closer to work, to cut the high cost of commuting brought on by record fuel prices, real estate agents and their customers said Wednesday.

Home Hunters Realty of Olympia broker Helen Wilkins agrees. She said that if gasoline prices continue to rise, it could result in a huge influx of people wanting to live closer to town.

Let’s take another look at the numbers on this. Suppose we have someone that’s commuting from Marysville to downtown Seattle (35 miles). They’re driving a car that gets them 20 MPG, so their monthly commute costs at $4 a gallon would be $280.

“Screw that,” they say, and decide to move closer-in, to Shoreline. So they sell their average house in Marysville for $300,000 (close to the May SFH median for that part of Snohomish County), and buy an average home in Shoreline for $400,000 (also close to the median). We’ll be generous and assume that they bought in January of ’03 for $185,000 and didn’t extract any equity, so they walked away with 50% equity out of the sale of their Marysville home after taxes and agent fees.

Up in Marysville, this hypothetical family was spending $280 a month on gas and roughly $1,120 a month on PITI, for a total of $1,400 a month. So lets see how they will do in Shoreline.

The new commute to downtown is only 10 miles, which shaves their monthly gas bill down to just $100 a month. Sweet! Unfortunately, even with $150,000 down, their PITI payment on the new Shoreline digs is about $2,000, bringing their combined monthly total to $2,100—$700 a month more expensive. 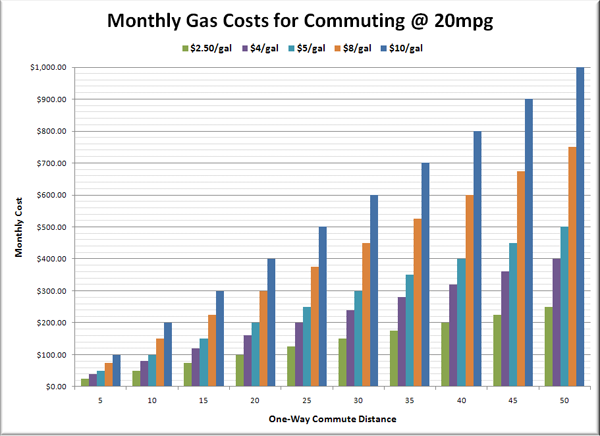 Pretty much any way you slice it, the higher cost of housing close-in far outweighs any financial benefits you get by cutting your commute.  Run the numbers for any pair of far-flung vs. close-in cities around Seattle and you’ll find the same thing.

By comparison, if that same family stayed in Marysville but sold their 20 MPG car and bought a used Prius that gets 45 MPG, they save nearly $200 a month (at $5/gallon), while the upgrade only cost about $10,000 up front.  Heck, they could probably trade straight across for a used Saturn that gets 30 MPG and still save over $115 a month.

The picture is slightly better for first-time home buyers, since they’re comparing both locations at today’s prices, but it’s still not a financial win to go close-in. A potential first-time buyer with a downtown commute looking at putting $20,000 down on an average home in Marysville can expect to spend $2,400 on PITI + commute, vs. $2,850 in Shoreline. With $50,000 down it’s $2,230 vs. $2,780.  That’s still $450-$550 a month more to live close-in, with the high cost of housing more than negating their gas savings.

Again, I’m not trying to advocate moving out to the boonies. I place a high personal value on living close to my place of employment, and consider avoiding time spent sitting in traffic to be far important than the cost of gas. What I’m trying to get at here is that the “high cost of gas” argument for why close-in neighborhoods will somehow retain their value just doesn’t wash.

There is value in living close to your job, but with the current dynamics of home prices and gas prices, that value is simply not financial.