Foreclosures in the Seattle area were up 41% year-over-year, according to a report from RealtyTrac.

Seattle-area foreclosures continued to rise in July, according to a new report.

The area, defined as King and Snohomish counties, had 1,030 properties with foreclosure filings, up 41 percent from a year earlier and 13 percent from June, according to a Thursday report from RealtyTrac, an Irvine, Calif., company that tracks foreclosures.

Here’s a chart of King and Snohomish foreclosure data since late 2006, courtesy of data collected from Foreclosure.com by the Bubble Markets Inventory Tracking blog: 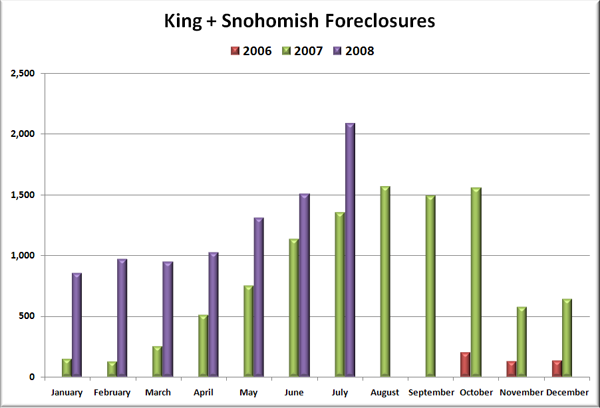 I feel that this trend will continue for a while.  As home prices continue to drop, many of the dangerous loans made in 2006 and 2007 will become foreclosures.