Today’s Seattle P-I spotlights a class of people in Seattle that could easily (and I would argue will) grow in numbers if current housing cost trends continue. That would be the working homeless. People that actually put out an honest day’s work each day, only to find they don’t have enough money to afford rent.

They clean up after the Bite of Seattle and Mariners games. They wash the windows of Little Saigon businesses. They paint houses, clear brush, mow lawns or pick up other irregular and unpopular jobs for $8 to $10 an hour.

$8 to $10 an hour doesn’t afford one very much in the city of Seattle. Although $8 * 40 hours * 4 weeks = $1,280 which is nearly $600 more than rent, one has to eat and pay for transportation as well. It probably could be done, and many of the working homeless admit that they don’t spend what little money they have very wisely:

The 22-year-old doesn’t always succeed. He isn’t good with the money he earns, he says, which is how he wound up under a highway.

Even so, with housing costs continuing to skyrocket in our area, it’s only a matter of time before a roof over one’s head becomes unaffordable no matter how carefully you manage your finances.

Despite its self-proclaimed order, Safe Haven can’t find a home. It now faces the daunting task of finding space in a hot downtown real estate market, where condominiums are worth more then ever.

High-dollar condo sales may be booming, but Mark Bradford still sees plenty of empty rooms as he walks around Seattle after work. Yet he beds down under I-5 in the evenings. He may work 35 hours a week, but the jobs pay no more then $9 an hour.

“You have to make at (least) $19 an hour … to afford rent,” said Bradford, who spent the last four years at Safe Haven.

I’m not sure where he got the $19 an hour number, but let’s take a look at some related figures. There’s a great resource someone has made for looking at housing affordability located at the Center for Housing Policy, which is where the graphs and figures in the rest of this post are coming from. Plugging in the Seattle metro area and a selection of 10 jobs into their tool yields some interesting results. 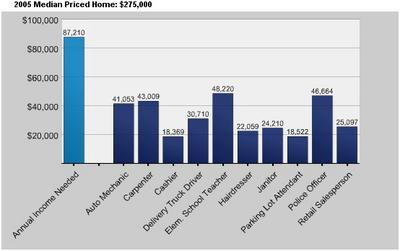 Looking first at the cost of buying a home, you can see that none of the people employed in any of the ten occupations I selected have much hope of being able to afford to buy a house, save for “creative financing” methods (which would explain the 38% figure we looked at earlier). Note that my professional salary as an engineer isn’t much higher than the salaries shown here, and I don’t think I know anyone that makes $87,000 a year. But people like those featured in the article, working in the lowest-paying jobs usually can’t afford to buy a house even during tamer markets, so let’s take a look at the rental scene. 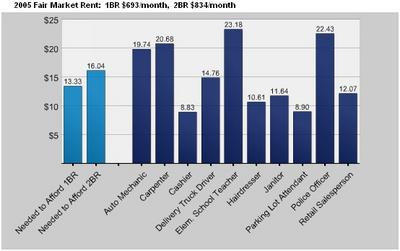 According to the Center for Housing Policy, the minimum hourly wage required to afford a one-bedroom apartment in the Seattle area is $13.33. As you can see, half of the occupations I selected don’t even make that much. Obviously everyone working in these jobs isn’t homeless, but the only way they can really afford a roof over their heads without stretching their finances extremely thin is to live with another wage-earner. This works well for those that can do it, but having multiple wage-earners in a small apartment isn’t always an option (i.e. – a family with a young child that needs 24/7 care and love).

So what does this all mean? If housing prices, and especially rent, keep going up, people working low-wage jobs will be faced with two choices: become homeless or move to a cheaper city. I know which one I would choose. But clearly that can’t happen, because a city’s economy would collapse if everyone working low-end jobs took either choice. I think this is fairly convincing evidence that current cost increase trends cannot possibly continue indefinitely. Something has to give. Whether it gives a little at a time or all at once is of course the big question.