Apologies for the lack of posting yesterday. I spent all day at the Art Institute downtown with my wife, at her “portfolio day,” which marks her completion of the “Residential Design” program. If you know someone that needs an interior designer for cheap (since she’s just getting started) shoot me an email.

Moving on… If you’ve been with this blog for a while, you may recall way back in November when we compared Seattle to our neighbor to the north, Vancouver, BC. Specifically, we discussed condos, and the fact that many people feel that Seattle doesn’t have enough of them. Well, several readers sent me a link to a new story on the topic: Booming Development set to change Seattle’s look.

Despite soaring construction costs and land prices, the downtown Seattle residential pipeline is booming with new condominium projects. Forty-nine new buildings — 13 of which already are under construction — are planned to be completed by 2010.

And all those buildings mean room for thousands more residents, who will need places to get groceries and the other necessities of daily life, and perhaps send children to school.

To some, it’s an expansion that’s long past due.

Developers are targeting a range of incomes. New condos will cost from $300,000 to more than $2 million.

To meet demand, 10,000 new units are planned for 2010. But panelist Matthew Gardner, principal real estate analyst at Gardner Johnson in Seattle, said he expects 60 percent of that number to actually be built.

Labor costs are on the rise, and urbanization in China and post-Katrina rebuilding are sucking up the supply of building materials.

Nevertheless, housing demand is strong in downtown Seattle. Emerging neighborhoods such as Belltown, Denny Triangle and the Market District are becoming popular for downtown’s culture and proximity to businesses. 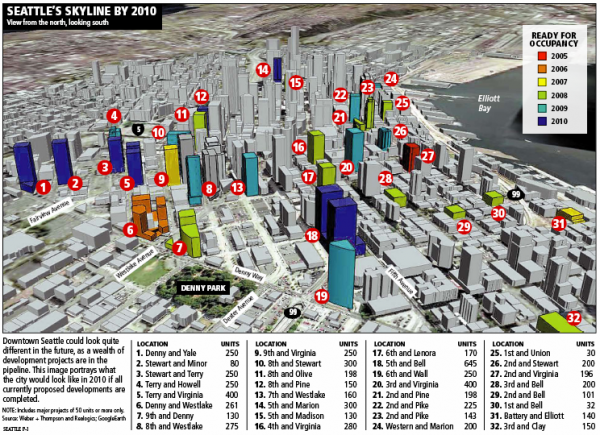 I guess I don’t really have all that much to say about all this. Maybe Seattle really is “under-condo’ed.” Maybe while the condo market in the rest of the country crashes, condos in Seattle will be boom, boom, boom. I mean, everyone I know wants nothing more than to spend between $300,000 and $2,000,000 for the privilege of owning 500 square feet in a fancy new high-rise downtown, separated from their neighbors by nothing more than a few layers of drywall and insulation. Isn’t that the American Dream™?