With all the press that Shiller’s Home Price Index got last week, I suppose it was inevitable that our region’s #1 real estate cheerleader would feel compelled to mount a stirring defense of Seattle’s real estate downturn immunity. Amusingly, Elizabeth Rhodes’ apparent comeback to Mr. Shiller’s frightening graph of home prices since 1890 is to splash a graph of her own across the front page of the Sunday paper. A graph that goes all the way back… to 1984 (conveniently just after Seattle’s last price declines). (Edit: FYI, this graph is not adjusted for inflation.) 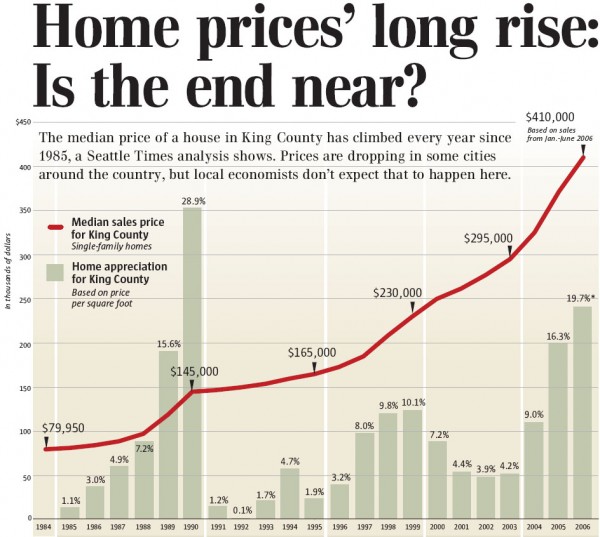 If history is any indication, King County may escape it, according to a Seattle Times analysis of single-family-home prices. It shows that appreciation rates have risen and fallen, sometimes precipitously.

But not once since 1985 — through recession years, interest-rate spikes, wars and employment downturns — has the countywide median price of a single-family home fallen, although it’s come close.
…
A market-risk index compiled by PMI Mortgage Insurance calculates that San Diego faces nearly a 60 percent chance that home prices will fall in the next two years — the highest for any U.S. city.

Then there’s Seattle: about 11 percent.

Seattle-area job growth is among the strongest in the country, Milner said, and the local unemployment rate is below its long-term average. Equally important, he said, is that Seattle’s housing prices, while high, are still more affordable to local residents than prices in other coastal cities.

There’s not a shred of new information in this 1,265-word rant, just the same tired arguments we’ve been reading over and over again—strong local economy, not as expensive as California, etc., etc., etc… The focus of this particular article is the “it’s never gone down before” argument. I wonder if Ms. Rhodes and her lauded “local economists” have heard of the phrase “past performance is no guarantee of future results.”

Since Ms. Rhodes hasn’t added anything to the discussion, I really don’t have anything to add myself, either. In fact, I addressed the “if history is any indication” argument at length a while back, so I’ll just ask you to read that, if you haven’t already.