Mercer Island Guy pointed out that I haven’t yet posted on the latest PMI report that was released last week.

Rapidly slowing appreciation and declining affordability contributed to a marked increase in the risk of home price declines in cities across the country, PMI Mortgage Insurance Co., the U.S. subsidiary of The PMI Group, Inc. reported today, but strong economic fundamentals continue to underpin many areas.
…
[Chief Risk Officer of PMI Mortgage Insurance Co. Mark F.] Milner commented, “Over the past five years, house prices in the United States have appreciated more than 56 percent, on average, and much more in some areas. In the same time period, incomes increased just 25 percent. That’s why affordability has decreased so much in many areas. Going forward, house prices and incomes need to come back into balance so that more Americans can afford to buy homes without resorting to loans that expose them to interest rate risk and the risk of payment shock.”

For those that don’t know, PMI stands for Private Mortgage Insurance, and the PMI group is “one of the largest private mortgage insurers in the United States.” Although Seattle’s latest Risk Index of 153 is low compared to most PMI-tracked cities in California, it is worth noting that it has more than doubled from its Summer 2005 low of just 64.

Taking info from past PMI quarterly reports, I produced the following graph that shows Seattle’s Risk Index as well as Affordability Index for the last two years as calculated by PMI. 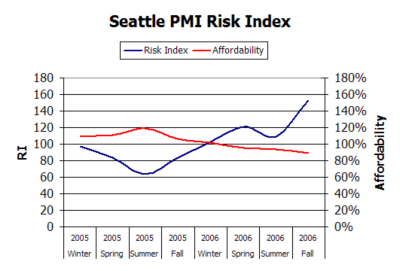 Just like I have been saying about inventory and sales, what I find most interesting is the trend. Decreasing affordability and increasing risk are not trends that I find particularly comforting.