It’s that time of the month again. Time for fun with numbers. September figures from the NWMLS have been posted. King County Residential inventory jumped even more than I was expecting, up 28.79% from last year. Sales tanked nearly 20% from August, and are down 20.59% from last year. Median sales price for single-family homes in King County actually decreased from August, down to $425,000 (up 11.48% from September 2005).

Also interesting is the fact that the “months of supply” number (inventory / pending sales) shot up almost a full month—the largest jump since December 2000—from 2.54 to 3.49, a value not seen since Winter 03-04. If that rate of change stays steady (I doubt it will), we will reach six months of supply (generally seen as a “balanced market”) before the new year.

As is traditional, I have uploaded an updated version of the Seattle Bubble spreadsheet for your number-crunching pleasure. Don’t forget that you can always find the link to the spreadsheet on the sidebar.

Here are the supply & demand graphs. 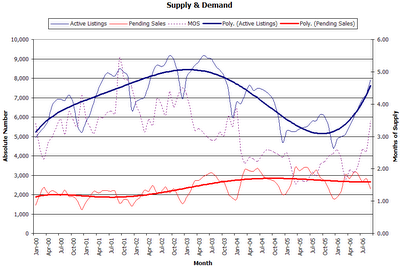 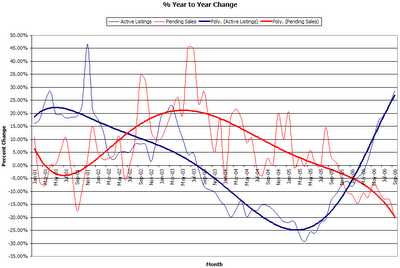 Check out those curves.