In the last few days I’ve run into a few comments in various discussions about Seattle real estate that have caught my attention:

Dean Jones, Condo Marketer:
“You might cringe at condos that sell for $2,000 a square foot. But it would be twice that in New York. We’re still, relatively speaking, a bargain.”

Bob, Urbnlivn commenter:
“When I look at the prices in New York, Tokyo, Hong Kong and London where new apartments can routinely fetch $1500 per sqft, Seattle still isn’t that expensive but it is getting there.”

What I find interesting about these comments is the tendency to justify Seattle home prices by comparing Seattle to large, major cities. Is this a valid comparison? Is Seattle really a major city like LA or NYC?

Usually when people refer to a city as “large” they are referring to the sheer population of the city. However, population density also has something to do with it, because otherwise any city that expanded their boundaries enough could claim to be a “major” city. So we could rephrase the question to ask: “What cities most closely match Seattle’s population and density?”

To answer that question, I made a list of a handful of major world cities and a number of large-ish US cities. Here are the population, land area, and population densities of each: 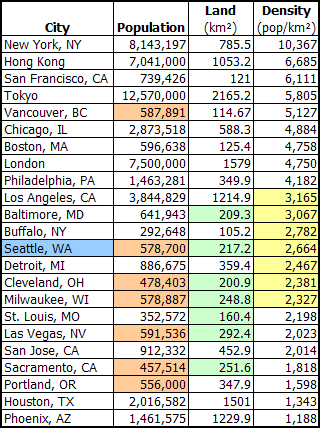 I have highlighted the six closest cities to Seattle in each separate category: population (orange), land area (green), and density (yellow). When looking only at population, Seattle is most similar to cities such as Las Vegas, Vancouver, Milwaukee, Portland, Cleveland, and Sacramento. When comparing land area, St. Louis, Cleveland, Baltimore, Milwaukee, Sacramento, and Las Vegas are all fairly close. Lastly, when you compare density (which the chart is sorted by above), Seattle is comparable to Los Angeles, Baltimore, Buffalo, Detroit, Cleveland, and Milwaukee.

There are two cities on the list that are similar to Seattle in population, land area, and density: Cleveland, Ohio and Milwaukee, Wisconsin.

Keep in mind that I am not attempting to compare all available statistics (such as income, economy, home prices, etc.) for these cities. I simply wanted to determine which cities Seattle should be compared to when discussing city size.

And now we know the answer: Cleveland and Milwaukee.

Update: Some people pointed out that my “highlight the three next highest and the three next lowest” method does not meet the rigorous scientific standard that the readers of this site deserve. Therefore, in the interest of science, I present this updated chart: 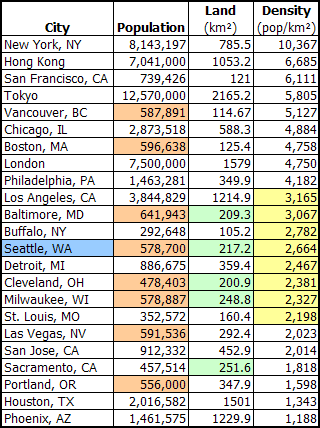 In this chart I have highlighted cities that are ±20% of Seattle in each category. As you can see, Cleveland and Milwaukee are still a close match to Seattle, with the city of Baltimore, Maryland joining the list.