As the nation’s home lending situation continues to deteriorate before our eyes, you can count on the local press to keep pushing the “we’re completely immune here” line. (Emphasis mine)

Nationwide, Americans are finding themselves unable to make their mortgage payments. Those folks share common traits: They’ve borrowed too much, they’ve lost their jobs or they hold an adjustable rate mortgage — and rates are soaring.

They also share this — for the most part, they don’t live in the Puget Sound region.

As home prices in other cities have soared, people have relied on exotic loans to enter the housing market. But now, those decisions are looking suspect.

If anyone had any misconceptions about Mr. Gardner being anything other than a salesman, an overarching, absolute statement like that should clear up any doubt. Not happening to any degree whatsoever? Really?

Is that why foreclosures have quadrupled since March? 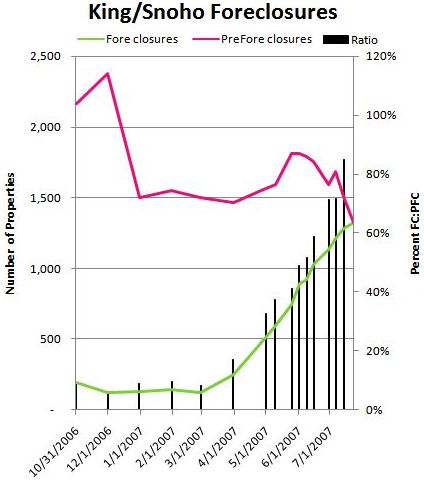 Of course we’re not seeing people falling behind on mortgage payments to the same degree as elsewhere in the country, since so far, anyone that starts to have trouble can just sell the house for more than they paid. Those days are rapidly coming to an end though, even in Seattle. Remember this chart? 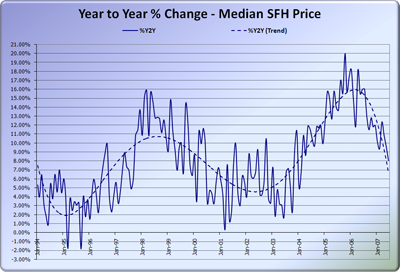 When that line makes its way down to zero, as it’s likely to do in the next 6-9 months (not certain, but likely), the Seattle area will see just as many mortgage problems as other parts of the country. As CKT pointed out in the forums, it’s coming up on us faster than you may think, with Pierce County already flirting with 0% YOY price changes.

Keep in mind that the exact same pie-in-the-sky, no problems here talk was common in other markets, right up until the problem became undeniable.

Update: Matthew Gardner pays us a visit to defend himself in the comments:

I continue to find your site interesting for in part, but amusing for the greater part. Two points that I would make are that the statement concerning foreclosure rates was applicable to the city of Seattle and not the MSA. Even if we were discussing King and Snohomish counties, one might suggest that 1,400 or so foreclosures in a 596,000 unit market is actually statistically insignificant (0.2%) and pre-forclosures in decline!