The latest (May ’07) Case-Shiller Home Price Index data has been released. Although appreciation is declining right along the path that has been predicted here, you can count on the local media to focus on the “Seattle is special” angle.

Seattle-area home values continued to rise in May, bucking a national trend of declining home prices, according to a Tuesday report.

Prices for existing homes in King, Pierce and Snohomish counties were up 0.9 percent from April and 9.1 percent from May 2006, according to Standard & Poor’s S&P/Case-Shiller Home Price Indices.

That annual increase was the highest of 20 major metropolitan areas that the study tracks, followed by Charlotte, N.C., at 7 percent, Portland at 5.7 percent and Dallas at 1.8 percent.

On average, year-over-year home values in the 20 cities declined by 2.8 percent.

Seattle’s strong economy, and the fact that home prices didn’t shoot up as wildly as in other parts of the country, has insulated it from falling prices, said David Blitzer, chairman of the Index Committee for Standard & Poor’s.

“Seattle and Portland for the last several months have been islands of relative calm and success,” Blitzer said. “But it’s very difficult to say whether Seattle has completely escaped any downturn or whether it’s just been delayed.”

Actually, it’s not difficult to say at all. In fact, I’ve said it before, and I’m going to say it again right now. Seattle’s downturn has merely been delayed.

Here’s an update to the “behind the cycle” chart I presented last month. Looks like we’re right on track… 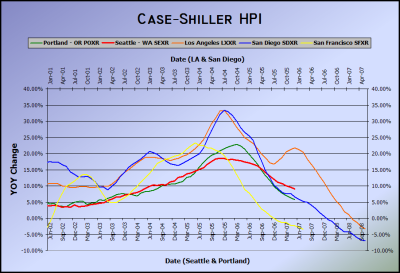 Do not expect the local media to give more than a passing mention to the “behind the cycle” concept until we get much closer to 0% YOY price change. I’m predicting they may finally start to get a clue early next year.

Update: Check out a great post by P-I blogger Don Smith: Caution about those housing price increases. He does a good job explaining some of the reasons that Seattle’s local economy lags behind much of the nation. Thanks, Don!