Aubrey Cohen of the P-I reports on the continuing trend of the increasing number of local foreclosures. Skipping over the article’s pointless comparisons with other parts of the country that are clearly ahead of Seattle on the bubble-bursting curve, here’s the meat of what’s going on around here:

Here’s a graph of monthly King & Snohomish foreclosures since October of last year, to help you visualize the recent trend: 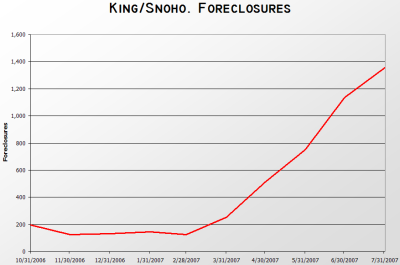 Nobody worry though, despite rapidly decreasing rates of appreciation with almost certain price deflation on the horizon in the face of a much tighter lending market and a possible national recession, Seattle is different from the rest of the nation and will soon see foreclosures level off. They definitely won’t continue rising to eventual record highs. Why would they? I can’t think of a single reason.