Seriously. What the hell.

President Bush said Thursday concern should be shown those who’ve lost their homes but it’s not the federal government’s job to bail them out.

“Obviously anybody who loses their home is somebody with whom we must show an enormous empathy,” Bush said. Asked whether he would champion a government bailout, Bush responded: “If you mean direct grants to homeowners, the answer would be `No, I don’t support that.'”

The president on Friday was to talk about several initiatives and reforms to help homeowners with risky mortgages keep their homes, a senior administration official said Thursday. Bush also was to discuss efforts to prevent these kinds of problems from arising in the future. 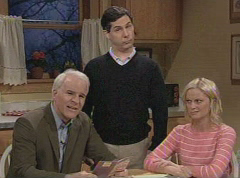 Any federal program that allows home-loan-owners to keep the house that they can’t afford, and at the same time avoid paying back their debt obligation under the terms that they willingly agreed to is a “government bailout.” If believing that people should be held responsible for their own stupidly risky decision to take on more home debt than they could afford makes me a heartless bastard, then I guess that’s what I am.

I have been responsible with my money throughout this housing mania. I paid off all my debts (which consisted mostly of student loans), contributed to my 401(k), saved, invested, and didn’t buy things that I couldn’t afford. I’m not about to sit here and watch the government spend my tax money to prevent people from suffering the consequences of their own piss poor financial decisions.

[Update: For the record, I am equally against a bailout of the lending institutions and investors that propped this whole thing up from the back end. Would letting it all play out be painful? Yes, and maybe that’s exactly what this country needs to teach us not to gleefully prance down this well-trod bubble path again.]

Say Hell NO to government bailouts!