The November market statistics from the NWMLS are here. Ta-da! Public press release and data pdfs have not yet been posted, but I will update the post with a link once they are. Here is the NWMLS press release, with links to the pdf summaries.

So we went from zero-point-nine right down to zero percent. The median price has now dropped month-to-month for four months in a row—which has not happened before as far back as I have data, which is 1993. The median price doesn’t really give us a complete picture of what’s going on, but the direction at this point is pretty telling.

The growth in inventory sped back up slightly, going back above 40%+ YOY growth. Also of particular note was a 17% jump in the number of new listings compared to last November, and a smaller-than-usual decline in total listings from October (down 7% versus 9-12% in recent years).

The total number of sales continued to plummet in November, dropping to 1,476—a level that only three months since 2000 have been lower than (Jan-00, Dec-00, Dec-01). Consequently, the months of supply still stands above that magical number six, at 6.74.

I’ll update this post later tonight with the graphs and the spreadsheet. 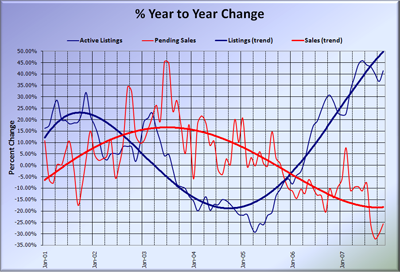 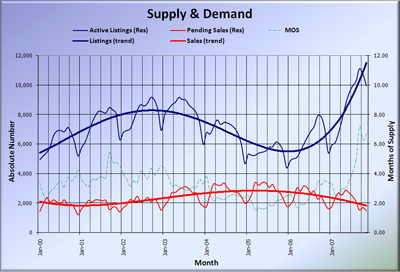 Here’s the SFH Median YOY change graph so you can see the dramatic trend continuing at the end: 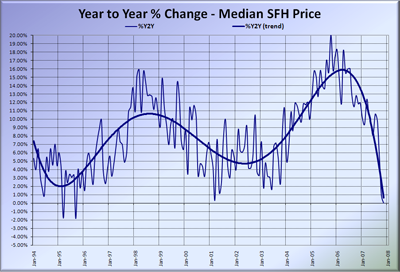 The graphs that I introduced last month (showing the total amount of SFH inventory on the market at the end of each month and the total pending sales for each month, with each year since 2000 overlayed on top of each other) are particularly useful to visually debunk the types of quotes we’re already seeing from real estate agents being quoted in the Seattle Times.

Some sluggishness in sales is to be expected, said Rich Lucas, a real estate agent in the Auburn office of Keller Williams in Auburn office. “The numbers go down in November. That’s just part of a regular season through the holidays,” he said.

Indeed, Thanksgiving week had about half the home sales throughout King County compared to the weeks preceding it, he observed.

So, last month was just like every other November? Really? No, not really. 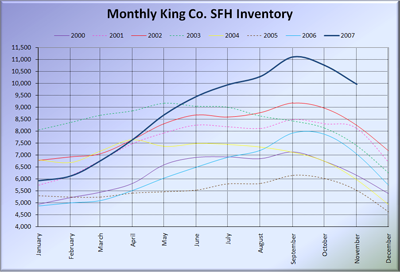 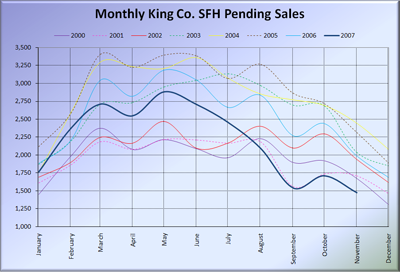 Here’s yet another new one, showing that as far as YOY median price change is concerned, there has not been worse November on record. 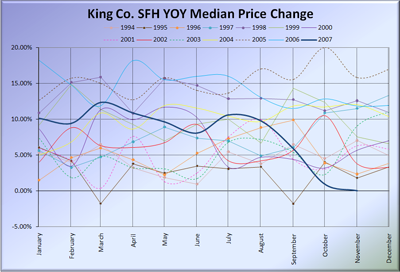 Check back tomorrow for the news roundup.