One of the arguments often discussed with respect to the housing bubble is the fact that the ratio of prices to rents has been fairly consistent on a historical basis, but that this ratio has been blown out in the past few years as home prices have shot up. Indeed, this can be seen in the chart below, which compares King County median home prices to annual rents for a typical two-bedroom apartment for the past ~20 years. In this chart, you can see that home prices have typically hovered in the range of 20 to 25 times rent. But since 2001 this ratio has steadily climbed to the point where it stood at 38 times rent at the end of 2006. 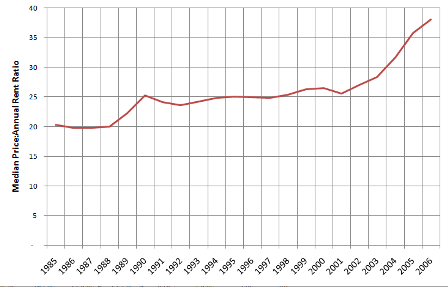 The strong historic relationship between rents and home prices is also validated in a recent academic paper on historic price to rent ratios, which shows that on a national basis, the same pattern has existed – with the price:rent ratio averaging about 20x – over the past ~45 years.

More recently, there have been several articles in the local press discussing the rate of rent increases. According to Dupre + Scott, Seattle rents have risen 8.6% in the past year – versus only 2.8% in total for the first six years of the century. Many who are bullish on local housing have commented on this as proof positive that it will be an increase in rents, not a decrease in home values that will bring the relationship back to its historic balance. The argument is basically that rents fallen behind incomes since 2001 – when the local economy slowed and the many people moved away after the dot-com boom. There is some merit to this. Rents have indeed been flat since the start of the new century. On the flip side, home prices have increased so rapidly during the same period it is hard to believe low rents are all of the cause.

So which is it? Rents too low? Home prices too high? Or some combination of both?

Recently, I came across a great data set from Conway Pedersen Economics, Inc, a local economics consulting firm – that provided enough history that I thought it would be possible to run some comparisons on rent increases vs. home prices using local data – and possibly shed further light on what is going on and where we are headed.

My basic premise is that rents and housing prices should track to each other at a fairly consistent ratio over time, but also and more importantly, that the rate of increase in both of these is governed by increases in income over time (as discussed here and here by Tim and myself, and in the aforementioned articles).

Using Conway-Pedersen’s annual data for housing costs and income back to 1985 – we can see that both rents and home prices have indeed closely tracked incomes over this time period. The correlation between the data series is quite strong. 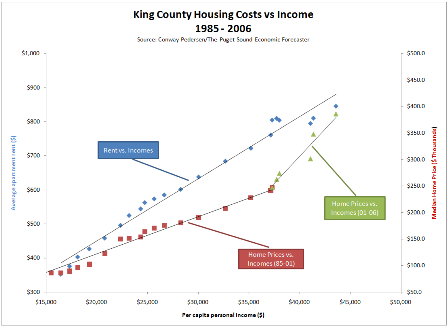 So what is one to take away from this? Is it definitive? Hardly. It has all the usual caveats about sample size, my limited grasp of statistics, etc. But it is interesting that we do appear to have had a clear divergence from our long-term “steady state” relationship between housing costs for both rents and home prices.

My thoughts based on this data:

My best guess: we meet in the middle and are back in synch by 2011-12 – which would imply a 12-16% decrease in nominal home prices over the next three or four years.