The TV and radio news stations are all blathering yesterday and today about the 2007 year in review report put out by the NWMLS. Most of the reporting is similar to what you can see at the Seattle Times, where they printed a short, unattributed blurb that basically parrots the positive spin put out by the NWMLS. For all I know it’s a direct quote of some press release. They also published a colorful pdf of their own to drive the upbeat message home.

With all the dismal national news about home sales, wasn’t 2007 supposed to be the year the local real-estate market died?

Well, surprise. Although home sales indeed were down 14.5 percent in King County and the number of for-sale homes was up almost 9 percent, prices more than held their own.

Over at the P-I Aubrey Cohen has a more skeptical take on the release, with his story titled Two sides to ’07 housing market:

Then came August, when skittish lenders tightened mortgage standards, making it harder to get a loan, and investors pulled out of the mortgage market, driving up rates on jumbo loans — those above the $417,000 threshold for mortgage giants Fannie Mae and Freddie Mac. The Seattle area’s high home prices make for a lot of jumbo loans.

Of course, none of the press write-ups bother to link to the actual NWMLS report (pdf), but are instead content to repeat out-of-context quotes such as the one about prices rising seven percent.

Anyone who has actually been paying attention to the market knows that something is fishy about that 7.1% figure. To figure out what’s behind that number, take a look at page 19 of the report. Basically, they arrive at that figure by comparing the median price for all sales in 2007 with the same figure for 2006. In a market that is consistently and steadily headed in a single direction, that kind of comparison would make sense. However, in today’s volatile market, such a statistic is totally meaningless.

Allow me to attempt to demonstrate the specific problem with comparing entire-year median prices between 2006 and 2007 graphically. 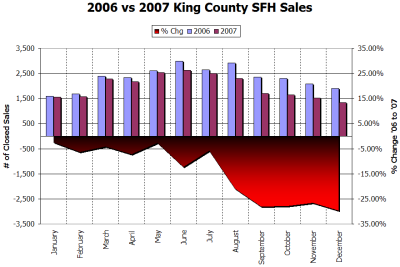 During the first half of 2007, closed sales were down from the same period in 2006, but “only” by about six percent. From July to August, the slowdown accelerated to over a twenty-two percent decline in closed sales versus 2006. The net result is that the entire-year median for 2007 is more heavily weighted toward the first six months than the 2006 entire-year median. 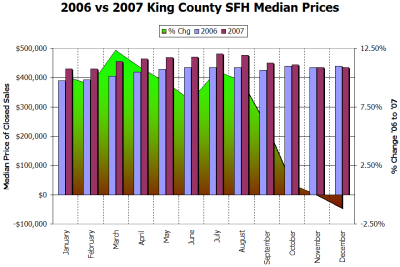 The sales imbalance wouldn’t really be an issue, except that in the first half of 2007, while sales were only slightly down, prices were up from 2006 an average of ten percent. Then, in the second half of the year while sales plummeted, prices were up only four percent (on average), and as we all know, finished the year negative. So when the price drops finally began in earnest, the declining volume of sales caused these lower prices to effect the entire-year median less and less each month.

People occasionally accuse Seattle Bubble of “skewing the data” to fit a preconceived notion of market declines. Obviously I am biased, but it looks to me like that is exactly what the NWMLS is doing by touting this entire-year median number as if it provides an accurate reflection of the 2007 market.