Apparently the only necessarily qualification for becoming a “world class” or “superstar” city is to keep on repeating that it is so. That’s the message I’m getting from the latest quotes from the Realtor’s spokesman Lawrence Yun, anyway.

Seattle-area home prices are manageable for typical workers, according to the chief economist for the National Association of Realtors.

First off, we have addressed this “superstar” or “world class” thing before. If you haven’t read it already, take the time to check out On Luxury Cars and World Class Cities. Also be sure to read P-I columnist Bill Virgin’s take on the world class question. The gist of our argument is that although Seattle is great, and we love it here (really we do), it is not a world class city by any available objective measure. Sorry, it’s just not, and repeating over and over again that it is doesn’t make it so.

When people like Mr. Yun make the assertion that Seattle is a “superstar city,” they never back that claim up with any sort of quantifiable data. There are measurable characteristics that one can use to judge whether or not a city is world class (a good list can be found on Wikipedia), and Seattle simply does not measure up, any way you look at it.

But that’s not my only problem with Mr. Yun’s speech yesterday. He also made a some verifiably false assertions and ludicrous predictions.

The percentage of income a typical family would have to pay for a typical home dropped from the low 20s in 1990 to the high teens through the early 2000s and has returned to the low- to mid-20s, according to Yun.

False. Unless Mr. Yun was talking about nationwide statistics (which is possible since we don’t have the complete text of his speech, but would be pretty meaningless), that statement is simply untrue. The “percentage of income” measurement is simply a variation on the “affordability index” data that we have discussed here before (for details on how the affordability index is calculated, see this post). If you divide the assumed 30% affordability level out of the index, you get the “percentage of income a typical family would have to pay for a typical home.” Let’s see what that data looks like for King County from 1990 to the present. 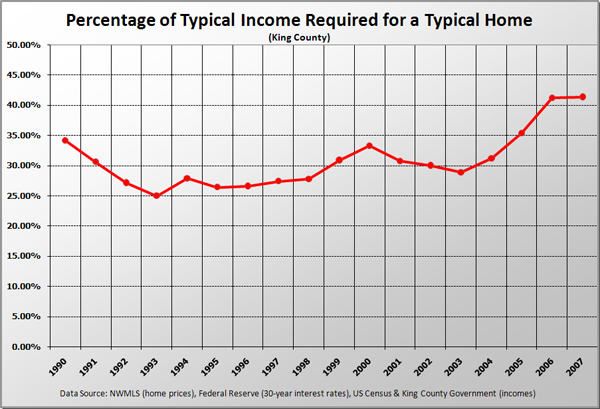 Yun predicted home sales nationwide would improve this year from a slow 2007, with sales and prices picking up in 2009.

Doubtful. As Deejayoh pointed out the last time Yun began shooting his mouth about Seattle, Mr. Yun and the NAR don’t exactly have a very good recent track record when it comes to predicting nationwide sales.

Housing sales have scaled back to normal levels from the “excessive boom” of 2003 through 2006 and have stabilized, Yun said.

False. As can be seen with the latest data from the NWMLS, home sales in Seattle since August have been anything but “normal,” and they certainly show no signs of “stabilizing.” 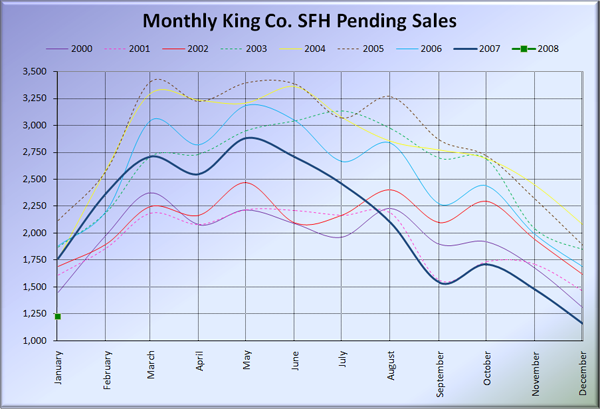 January pending sales were 15% lower than the lowest post-2000 year on record, and the trend line is very clearly headed down. Again, he could have been talking about nationwide statistics, in which case I don’t have the data handy to debunk his claim, but for the Seattle area, his claim is clearly false.

“We are probably scratching the bottom in terms of home sales activity.”

Doubtful. You would think that Mr. Yun would have learned a lesson about calling the bottom from his predecessor at the NAR. Apparently not.

As an added bonus, licensed Realtor Christopher Braxtan over at the Real Estate Professionals blog chimes in with a false assertion and dubious prediction of his own:

…despite the recent building frenzy, the population in Seattle continues to outgrow the supply of housing.

False. We’ve debunked this claim using sourced, verifiable data at least twice before: Big Picture: Supply vs. Demand, and King County NOT Running Out of Land.

There are enough people earning above-average incomes that the prices of homes in Seattle will remain stable until we build a lot more affordable housing.

Doubtful. Again, we’ve covered this before. Incomes are neither growing all that fast, nor high enough to prevent home prices from declining.

I challenge anyone that agrees with Mr. Yun’s assertion that “Seattle is becoming a superstar city” to bring forward some quantifiable, objective data to show that this is true. Until that happens, I’m forced to believe that such claims are nothing more than hot air.