It looks like we may not get to have a 2007 Street of (Materialistic) Dreams follow-up post this year like we had for 2006, since the homes have apparently been torched. 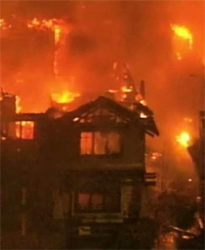 Several homes were destroyed by a series of fires early this morning in a Street of Dreams neighborhood near Maltby in Snohomish County.
…
The fires, first reported about 4 a.m., were left to burn through the morning because firefighters were concerned about possible booby traps.

More than four hours after the fires were reported, the houses continued to burn and smolder.
…
Police and the Bureau of Alcohol, Tobacco, Firearms and Explosives are investigating, according to Snohomish County District Seven Chief Rick Eastman.
…
Eastman said one is a total loss, and two homes are substantially damaged. He says fires were set at a total of six homes.

Due to a spray-painted message left on a sheet at the scene, the immediate theory is that the “eco-terrorist” group Earth Liberation Front (ELF) is responsible for the fire.

Here’s another interesting fact worth mentioning that was left out of the Seattle Times story and tacked on to the very end of the P-I story:

None of the five showcase homes from the Street of Dreams last summer had been sold, said Grey Lundberg, a builder of one of the houses.

As some folks have pointed out in the forum discussion about these fires, whether the ELF was responsible or not, having the unsold homes burn might actually be better for the builders than having them sit unsold for who knows how long while the local housing market continues to decline. Personally, I doubt the builders are responsible, but who really knows in today’s environment.