P-I Real Estate writer Aubrey Cohen had a nice post on his blog yesterday that pointed me toward a recent report that is worth mentioning here as well.

The report is titled House Prices in America and is published by Global Insight. According to their About page, they provide “comprehensive economic, financial, and political coverage of countries, regions, and industries.” As far as I can tell, they’re a much more neutral source than, say the NAR or Realogy.

The most interesting part of the report is their “statistically normal house values,” which they calculate by considering “not only house prices and interest rates, but household incomes, population densities and any historical premiums or discounts metropolitan areas have exhibited over time.” You can read all about how they determine the appropriate value for a market in their Methodology pdf.

Last time we checked in with Global Insight was September 2006, when they pegged Seattle as 33.8% overvalued. Now that prices have finally begun to drop around here, as of the first quarter 2008 they are ranking Seattle as 22.8% overvalued. Here’s how our area stacks up compared to the rest of the country: 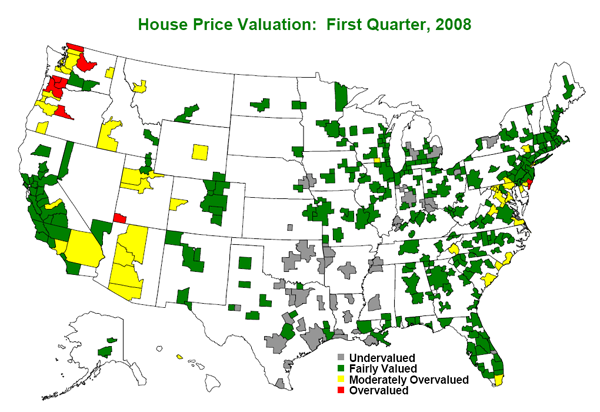 Hmm, the Pacific Northwest seems to be the last holdout of the overvalued markets. Portland is even worse than Seattle, coming in at 36.8% overvalued.

According to their analysis, Seattle’s current price of $393,200 “should” be $320,195 (19% lower). So does this mean prices here are going to drop 19%? Not necessarily, but based on what has happened in nearly every other part of the country, I’d say it’s pretty likely. Here’s what has happened in some other cities in the last two years:

Also note that the standard deviation of their valuation is +/-15 percent, so Seattle could be anywhere between 7.8% overvalued and 37.8% overvalued, which would mean “normal” prices of $364,750 and $285,350, respectively. In any case, it’s an interesting report that I recommend you check out.