Oh man. They let Elizabeth Rhodes take just one day off, and look what happens: 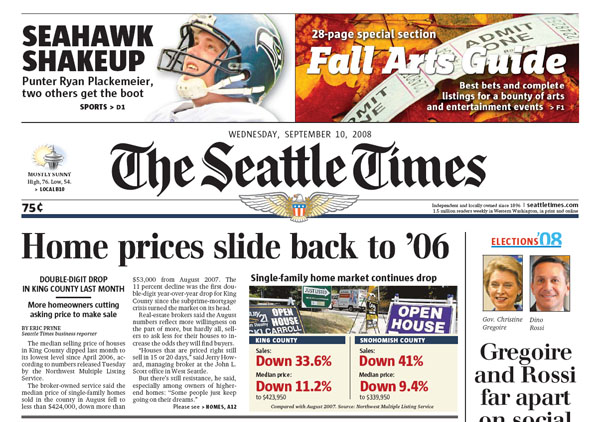 Gahh! It’s right there in giant black print, above the fold on the front page! I can’t imagine the Seattle Times’ real estate advertisers feeling too great about this…

The median selling price of houses in King County dipped last month to its lowest level since April 2006, according to numbers released Tuesday by the Northwest Multiple Listing Service.

The broker-owned service said the median price of single-family homes sold in the county in August fell to less than $424,000, down more than $53,000 from August 2007. The 11 percent decline was the first double-digit year-over-year drop for King County since the subprime-mortgage crisis turned the market on its head.
…
“Houses that are priced right still sell in 15 or 20 days,” said Jerry Howard, managing broker at the John L. Scott office in West Seattle.
…
Matt Deasy, general manager of real-estate giant Windermere’s Eastside operations, said the big year-over-year decline in median house prices shouldn’t surprise anyone.

Unless, you know, they were listening to the real estate agents that tout every single month as a “great time to buy.”

I also liked this bit from yesterday’s Times blurb by Cindy Zetts:

The most accurate comparison of home-sales numbers is done by looking at sales in the same month each year. This is because seasonal changes in the real-estate market can distort the picture when comparing one month to the previous one.

Some in the real-estate industry said they expected the local picture to improve in August because the market downturn began in August 2007. Until last month, they said, numbers were comparing a bad year to a good one. But August numbers don’t show an improvement — in some cases, the drops are more dramatic than those of previous months.

Looks like it’s finally becoming undeniably obvious that the REALTOR©®™ has no clothes. It’s nice to see the Times finally stop pulling their punches.

Potential home buyers are out there in Seattle, watching and waiting.

“Different people tell me it’s a really good time to buy,” Hurricane White, of Seattle, said at a Greenwood open house Sunday. “I heard that back in April, and as I have been waiting, I have been able to look at more properties.”

And prices have continued to drop.
…
“You’ve got some properties now that have been on the market for a significant amount of time and are starting to have panic sellers,” said Glenn Crellin, director of the Washington Center for Real Estate Research at Washington State University. “The bottom line here is that for prospective sellers these are bad numbers, and what they’re going to have to evaluate is whether this is the right time for them to put their home on the market.”

Crellin noted that prices tend to dip toward the end of the year and Washington still has a lot of adjustable-rate loans due to reset to higher, potentially unaffordable payments in later 2008 or early 2009.

“That suggests to me that we’re going to continue to see some problems and instability in the market really for the next 15 months,” he said.

But Crellin also called timing the market “almost impossible.” Buyers should look at whether an individual home is priced well, and if they can afford it, plan on owning it for at least three years, he said.

Note that Crellin is the guy that last November said this:

“Owners need to focus on why we’re dealing with housing in the first place. It’s shelter. They need to focus on the shelter and potential tax breaks … and not worry so much about whether in a year a house is worth $5,000 more or $50,000 more.”
…
I don’t think there’s any reason to think we’re going to see a sharp decline [in home values]. Median prices have leveled off in recent months. I think we’ll see limited price increases through the middle of next year.

How he has managed not to completely destroy his credibility with the media by now is a mystery to me.

There are some good deals on homes in Snohomish County, but tighter credit and the upcoming elimination of a program that allowed builders to help buyers with their downpayments are making things tougher, agents said.
…
“I cannot stress enough what an amazing opportunity exists right now for move-up buyers,” said J. Lennox Scott, CEO of John L. Scott Real Estate. “The price gap between affordable price ranges and higher price ranges has narrowed, which means these buyers can afford to ‘price jump’ into a new home.”
…
Dick Beeson a Tacoma broker who is a director of the listing service, said low interest rates and a good selection should make it a good time to buy but that it’s hard to get a loan.

“Buyers are stymied by the lending world’s inability to get their collective heads around making loans instead of running scared to the nearest disapproval letter,” he said.

I’m a bit disappointed in Mike Benbow, who did little more this month than reprint the NWMLS press release.

Median home prices in Pierce County dropped in August even as the number of homes on the market declined. Figures released Tuesday by the Northwest Multiple Listing Service showed a 11.9 percent decrease from the same time a year ago. It’s the 11th drop in the past year and the largest.
…
Pat Maddock, an agent with Coldwell Banker Bain and a former president of the Pierce County Association of Realtors, has checked on areas across the West Coast and is convinced that Western Washington is in great shape. Even though the statistics look rough for Pierce County, it is nothing compared to areas such as Phoenix and Las Vegas, he said.

Low prices, lots of homes on the market and low interest rates continue to show that it is a fantastic time to be a buyer. But buyers are “sitting on their hands,” thinking things could get even better and waiting to buy. Another factor might be the tightening of credit markets that have made mortgages harder to get.

“If you are waiting for the market to bottom out, you’re going to miss it,” Maddock said. “You don’t know it’s at its lowest until it climbs upward.”

Don’t forget, “when the market flips, it goes in one day!“

On a year-over-year basis in August, sales of single-family residences and condominiums stumbled, falling nearly 31 percent to 303 units from 439 units, the data show.

Since January, median home prices have fallen about 5 percent compared with a year-over-year price drop of nearly 8 percent in August.

I guess until price drops hit double-digits, you can call them “stable.” Sounds like it’s a great time to buy… Right?

Here’s a pair of bonus stories from the TV and radio:

I think the double-digit year-over-year drop may have broken a psychological barrier of some sort and finally gotten the message through to Seattle-area home buyers that yes, prices really are dropping even here in pink pony land.