The local unemployment rate continues to rise sharply, according to the August data that was just released.

As economic thunderstorms lash Wall Street and soak most of the rest of the country, Seattle and Washington state have managed to stay fairly dry. But beware: The skies are darkening quickly.

Unemployment in Washington state took a big jump last month, more evidence that the local economy is sliding toward recession. And though inflation abated a bit, prices for food, fuel and shelter are still considerably higher than a year ago.

The statewide jobless rate hit 6 percent in August, after adjusting for seasonal variations, versus a revised 5.6 percent in July, the state Employment Security Department reported Tuesday. That was just below the national rate of 6.1 percent.

The last time the state jobless rate was this high was October 2004, when the state was coming out of its last economic downturn. Now, however, unemployment is rising rapidly: As recently as February, the jobless rate stood at just 4.5 percent.

Unemployment also rose sharply in the Seattle metro area, to 4.8 percent from 4.3 percent in July.

Here’s a long-term chart of Seattle-area (King/Sno) unemployment going back to 1990, to provide some context for the latest report: 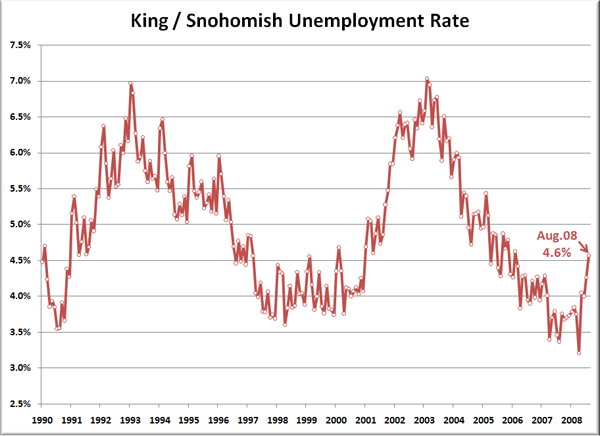 Unemployment is still relatively low, but the rate is definitely climbing quickly. From December 2000 to March 2002, local unemployment shot up 2.5 points. That’s an average rate of 0.17 points per month. This time around, the rate has gone up 1.4 points so far in the last four months, for an average increase of 0.35 points per month.

In other words, unemployment is rising at twice the rate it did leading into Seattle’s last recession. If this rate of increase keeps up, we’ll hit 7% local unemployment by March.

We’re only four months into the current spike, so I wouldn’t read too much into this data, but it’s certainly not very reassuring.