I read a great post today over at Behavior Gap (thanks to an email from J.D. @ Get Rich Slowly) that is definitely worth sharing: 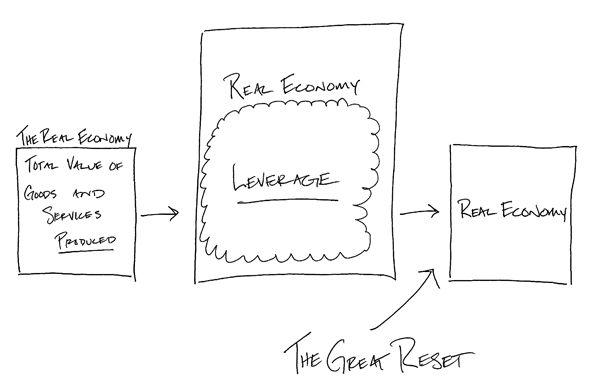 It used to be that savings and thrift were basic, core, American values. Check out Tom Brokaw’s the Greatest Generation if you can’t remember a time when Americans valued thrift and savings. The media is so focused on “reviving” the economy that it is now seen as a negative sign when saving increases and spending declines. I know the economy as we have known it over the last 10-20 years depended on consumer spending, but the problem was THAT WAS MONEY WE DID NOT HAVE!

The word recession implies that it is a temporary decline and that things will return to “normal.” If we define normal as the last 10-20 years, “reviving” that version of the economy would be the definition of insanity (doing the same thing and expecting a different result). That version of of the economy was not REAL. That version was on the wicked, performance-enhancing drug LEVERAGE. That version was not sustainable.
…
Now in real life this GREAT RESET is a very painful process, but to ignore the reality won’t help. We can’t go back to the levered up version because it is not REAL. As Thomas Friedman said recently, “…there is no easy escape here, except taking our medicine, getting our fundamentals right again and working our way out of this, brick by brick…”

Carl hits the nail on the head.

Over the last few decades, we have constructed a sham economy that was not sustainable.

When the pyramid scheme failed (as all such schemes are destined to do eventually), rather than the healthy response of “whoops that was stupid, now let’s rebuild a sustainable, sound economy,” we’re hearing nonsense like “we need to prop up housing prices” and “we need to spur more consumer spending.”

Let’s put a stop to the delusion that things can just magically go back to the way they were when everybody (individuals and corporations alike) was hopped up on leverage. It’s not going to happen, nor should it.

Falling home prices and consumer spending are the necessary medicine that must be taken to return to a fundamentally sound and sustainable economy.