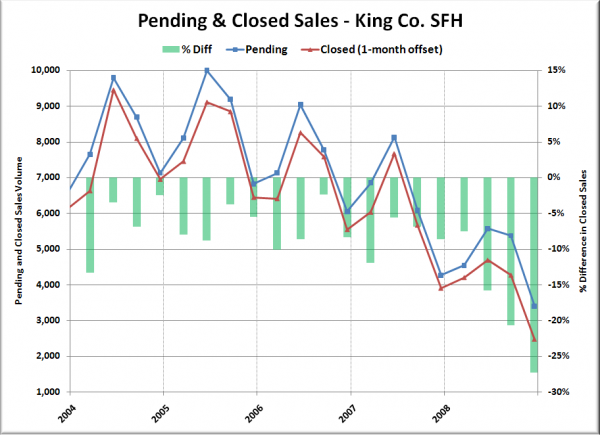 Yet again, the number continues to grow, and the local media continues to ignore the increasingly alarming discrepancy. Keep this widening gap in mind when agents quoted in the media refer to increasing pending sales as some sort of indication that the market is turning around. Pending sales may be increasing, but more and more of them are never turning into closed sales.

I realize that last quarter there were some who theorized that this discrepancy was the result of the NWMLS rule change in July that caused homes in “Subject to Inspection” status to be pulled from the publicly-viewable listings. However, I have spoken with numerous individuals that have asked various people at the NWMLS (including their “statistician”) directly about this change, and each one has been assured that the new rule did not affect the way that the end-of-month statistics are compiled (i.e. – the definition of “pending” in the monthly reports has remained consistent, despite the rule change).

Are buyers getting cold feet? Is financing falling through? What explanation is there for one in four pending sales to never reach closing?