The intensity of the push from a couple of major national lobbying groups (NAR and NAHB) to extend and/or expand the $8,000 first-time homebuyer tax credit seems to have increased since we last discussed the topic on these pages. With the supposed end of the program coming up in about seven weeks, now seems like a good time to broach the subject again.

Here’s the latest news on the status of a possible extension: Democrats May Extend Tax Credit for Homes

Democratic Congressional leaders are working with the White House to extend an expiring $8,000 tax credit for first-time home buyers, and aides said Wednesday that they were considering making it available to current homeowners who purchase a new residence.
…
The Democratic leaders met with the president to discuss a broad range of options to combat persistent high unemployment, officials say.
…
Keeping the home-buyers credit and broadening it has been a priority for real estate agents and the home builders lobbies, and for [Senator Harry] Reid, who faces a tough re-election race next year in a state [Nevada] that has been among the hardest hit by the housing crisis since mid-2007.

Okay first off, let’s drop the nonsense notion that somehow propping up home prices will “combat persistent high unemployment.” That’s a complete non sequitur. Now, before we really talk about extending the credit for another year, let’s have a look at its effectiveness and cost this year.

In February, when the “$787 billion” stimulus plan was passed into law, the CBO estimated that the $8,000 first-time homebuyer tax credit would cost around $6.6 billion (source, source). That would have been 825,000 first-time buyers claiming the $8,000 credit. As of September, the NAR is estimating that “1.8 to 2.0 million” first-time buyers will claim the credit, with a mere 350,000 of those being sales that “would not have taken place without the credit.” That would be a total cost of about $15.2 billion. Here’s a visual of those numbers: 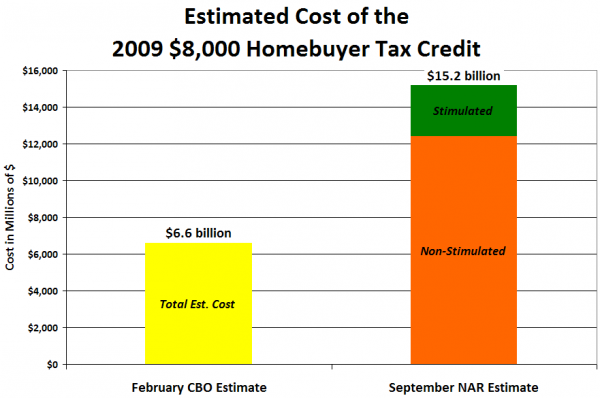 To me, that looks like a program that has been pretty poor at actually “stimulating” people to do something, and pretty good at giving a nice fat $8,000 handout to people who were planning to buy a house anyway, at a cost well over double the original estimate.

However, apparently to organizations like NAR and NAHB, that looks like a rousing success story that should be both extended and expanded. According to Calculated Risk the NAHB is pushing to up the credit to $15,000, expand it to all homebuyers, and extend it another year. Because, you know, We The People can afford it, right? It’s not like the federal government is facing a massive budget deficit and a mind-blowingly enormous debt.

If we’re going to use the kind of anti-logic that NAR and NAHB are apparently high on, I like the plan that (ironically) was suggested by a Georgia Realtor: Let’s increase the tax credit to $100,000! Heck, why not make it permanent, and up it to $500,000, or even a cool $1 million? Apparently cost and effectiveness are not factors in this decision, we should just do whatever it takes to get those pesky homebuyers “off the fence,” right?

The constant argument that is raised in favor of extending the tax credit is that because home sales are a major driving force in our economy, stimulating the real estate market is a critical ingredient to economic recovery. Is it just me, or does that way looking at the problem seem obviously inherently flawed?

Allow me to explain by way of analogy. Let’s say I decide to quit my job as an engineer and instead get into a full-time Ponzi scheme that has me selling “business secrets” to an ever-growing pyramid of underlings, who themselves re-sell the “business secrets” to their own underlings, passing on a commission to me. Eventually the scheme collapses (as all Ponzi schemes inevitably do), and my income drops to zero. Now, I could go back and get a new engineering job again, but instead I decide to focus all my effort on figuring out ways to get people buying “business secrets” again so I can get my income back to where it was at the peak.

Sounds insane, right? Yet that is exactly what the government is attempting to do with the various “stimulus” plans directed at the real estate market.

Meanwhile, as Calculated Risk points out, “stimulating” people to move out of rentals and buy their own homes has some rather unpleasant unintended consequences:

And that means even more pressure on rents (rents are already falling). This is good news for renters, but this will also lead to more apartment defaults, higher default rates for apartment CMBS, and more losses for small and regional banks.

What I don’t understand is why aren’t major REITs that own rental units across the country (e.g. Equity Residential) lobbying congress just as hard as NAR and NAHB against extending the tax credit? You would think they would have a pretty strong interest in not defaulting on their loans due to too-low occupancy rates.

So basically what we’re looking at in the $8,000 tax credit is an inefficient, massively expensive, and quite probably economically damaging program. I can’t imagine why Congress hasn’t expanded it already.