[Warning: The following commentary is only marginally related to real estate / housing.]

Despite what some of my readers in the real estate industry may think, I’m a generally upbeat, optimistic kind of guy. I like to believe that things will be better tomorrow than they are today; that American ingenuity and hard work can overcome any obstacle in our path.

That being said, it has been difficult recently to maintain a positive outlook on the future, and not just because of the inevitable mathematical conclusion of ever-increasing debt. 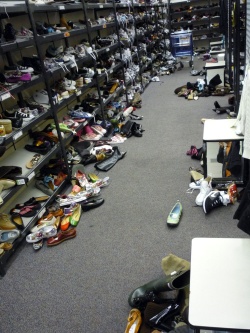 How is it even possible for so many people to be this disgustingly, colossally lazy?

Bear with me for a moment while I attempt to explain where I’m coming from here. Consider the photo at right. What you see pictured here is the shoe section of the Nordstrom Rack on Alderwood Parkway at about 8:30 last night. This is not the aftermath of some sort of blowout sale—it’s is just the end of the day on a regular weekday at this mid-range retail outlet (the shoes I looked at were priced $50-$100). Throughout the course of the day dozens and dozens of people pulled a shoe off the shelf, tried it on, and just left it on the ground.

If your average American is so colossally lazy that they won’t even expend the near-zero effort required to put the shoe back on the shelf where they found it, is it any surprise that so many people failed to read their mortgage documents before signing and are now honestly surprised that their teaser rate interest-only mortgage payment has skyrocketed? Is there any hope that these same Americans that are leaving messes like the one pictured at right in their wake every day will be able to pull together and clean up the mess created by twenty years of drunken economic partying?

Will Americans finally buckle down, stop spending more than they earn, give up on get rich quick pyramid schemes, and learn to live within their means on a sustainable path to long-term prosperity? So far I haven’t seen any evidence to suggest that this is in our future.

Consider the latest data from an annual home-buyer survey administered by Robert Shiller and Karl Case:

In our survey, we ask, “On average over the next 10 years, how much do you expect the value of your property to change each year?” The average answer among 311 respondents in 2009 was an increase of 11.2 percent. The median response — with half above, half below — was 5 percent, also high.
…
In our survey data from one year earlier, when prices were falling at an annual rate of nearly 20 percent, buyers were still expressing long-term optimism. Then, the average answer to the question about expected yearly increases in home values was 9.5 percent a year, with a median of 5 percent — high figures indeed for that time. The bubble thinking is not new.

Even with the biggest housing bust in pretty much anyone’s memory, people still think that buying a home will be a magical path to 10% yearly returns—no effort required. Unbelievable.

I truly hope that we can somehow escape this economic death spiral of ever-increasing debt, destroy the prevailing sense of entitlement, and return to a time when financial responsibility is admired and hard work is rewarded. I just have a hard time finding any evidence that we’re headed in that direction.