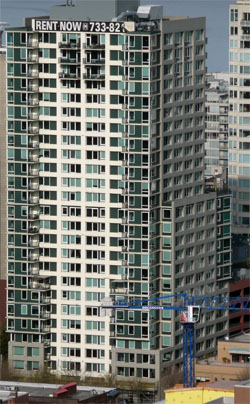 The McGuire apartment building, at 210 Wall Street in Belltown, opened its doors in 2001. Now, just nine years later, it’s closing them for good. Though the marketing copy, ironically, boasts “exceptional attention to detail in design construction,” the 25-story building, with 272 units, is suffering from “corrosion of post-tensioned cables and concrete material and reinforcement placement deficiencies,” according to legal real estate advisers Kennedy Associates.

Since repair is financially infeasible, residents are being relocated (with larger incentives the sooner they leave), and the building will be dismantled. Everyone must go by the end of this year. This comes as a bit of a shock to residents of the upscale building, who are paying $1,000-$1,500 per month just for studios. But investigation of the defects revealed that conditions were becoming unsafe, and Seattle’s Department of Planning and Development is requiring the building’s owner to submit periodic inspection reports to track the building’s health.

This brings up an interesting question to me. Eight to ten years from now as the plentiful high-rise products of the housing bubble begin to age, how many similar situations will we see cropping up? With this so-called “upscale” apartment being torn down after less than ten years, I can’t help but wonder just how much attention to detail was really given to the latest batch of towers as developers rushed to cash in on the gold rush.