Let’s have a look at the latest data from the Case-Shiller Home Price Index. According to February data,

Last year prices fell 1.5% from January to February and year-over-year prices were down 15.4%.

Hilariously, Bloomberg continues to run a headline on the Case-Shiller data that implies that home prices rose in all twenty cities tracked by the index. From Home Prices in U.S. Cities Rise Less Than Forecast:

April 27 (Bloomberg) — Home prices in 20 U.S. cities rose less than forecast in February from a year earlier, a sign a housing recovery will take time to develop.

The S&P/Case-Shiller home-price index of property values in 20 cities increased 0.6 percent from February 2009, the first gain since December 2006, the group said today in New York. The median forecast of economists surveyed by Bloomberg News projected a 1.3 percent advance.

See, what they did there was to suddenly switch which data point they are talking about. In all their stories for the last six months or so, they have been focusing in on the month-to-month change in the seasonally-adjusted value of the 20-city index. But this month, the 20-city index fell month-to-month, even if you use the semi-bogus seasonally-adjusted data (more on that below). Hey, no problem! Just find a different data point that suits the narrative of “home prices rise.” So all of a sudden, they switched to reporting the year-over-year change in the 20-city index. Classy.

I bring this up to point out the reason that I do my best to remain consistent in which data points we discuss on Seattle Bubble each month. When “journalists” pick and choose whichever data is convenient for the story they want to tell, it is difficult for the readers to really understand what is going on.

So, here’s our offset graph—the same graph we post every month—with L.A. & San Diego time-shifted from Seattle & Portland by 17 months. San Diego and LA have added to their YOY gains. Portland slipped slightly, and the rate of increase in Seattle’s YOY change has definitely stalled. Portland came in at -4.8%, Los Angeles at +5.3%, and San Diego at +7.6%, still all better than Seattle. 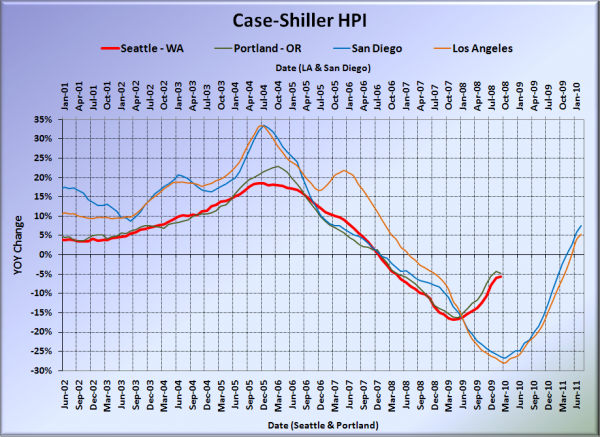 Here’s an interactive chart of the raw HPI for all twenty cities through February. 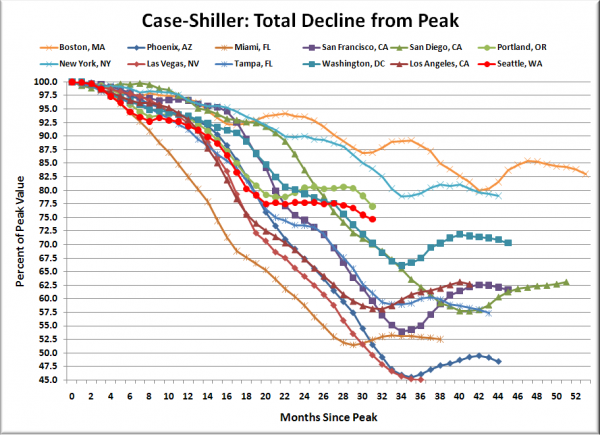 In the thirty-one months since the price peak in Seattle prices have declined 25.3%, yet another new post-peak low. 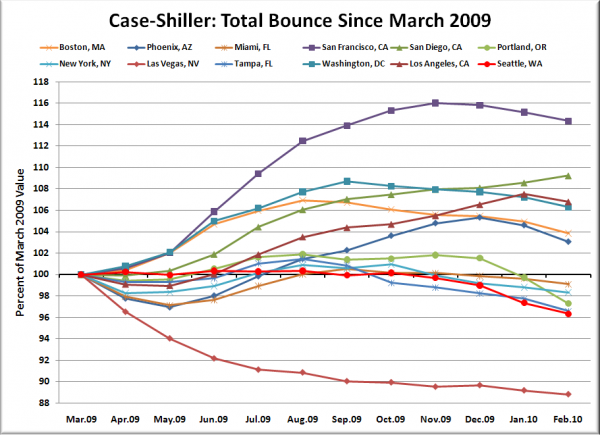 Hmm, only San Diego seems to still be experiencing the tax credit high.

Lastly, I thought it would also be worth pointing out a little tidbit that came out earlier this week from S&P. I have avoided using the seasonally-adjusted data in most of my posts on the Case-Shiller releases, because it has always struck me as somewhat arbitrary. As it turns out, the data analysts over at S&P are starting to feel the same way (pdf, via Calculated Risk):

Obviously, we will continue to build our charts on the unadjusted data.