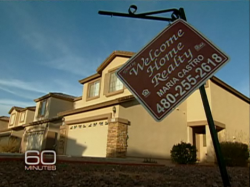 With the subject of “walking away” finally hitting the mainstream media in full force this weekend with a dedicated segment on Sunday’s 60 Minutes, it would appear that the idea of giving the keys back to the bank to get out of a financial death spiral continues to gain some serious traction.

Of course, even though walking away would massively improve their financial situation and should be a no-brainer for many people (several such people are profiled in the 60 Minutes segment), strategic default (choosing not to pay your mortgage even though you can afford to) still carries something of a social stigma in many people’s minds.

For example, “walking out on a mortgage” was recently listed among “8 money missteps” by USA Today, which was then repeated without question and escalated to a “financial deadly sin” by my favorite personal finance blog, Get Rich Slowly (P.S. – buy J.D.’s book). Here in my neck of the woods, Kenmore real estate agent James Lupori called the notion “disturbing” in a recent post.

However, while some individuals may still be fretting about their “moral obligation” to pay their mortgage, a growing number of recent high profile examples have demonstrated that strategic default is really nothing more than a smart business decision.

In January, the owners of the massive 11,227-unit Stuyvesant Town and Peter Cooper Village apartment complex in Manhattan announced they would be handing the property over to their creditors. Closer to home, Boston-based Beacon Capital Partners announced last month that they will be intentionally defaulting on the $2.7 billion loan that they used to buy the Columbia Center—Seattle’s tallest skyscraper—and 8 other towers in the Seattle area (as well as 11 in the DC area).

“We’re seeing a lot of these ‘strategic defaults,'” said Ben Thypin, senior market analyst with Real Capital Analytics, a commercial real-estate research firm in New York. “Beacon could probably pay the mortgage, but the properties are worth less now, and they don’t want to make payments based on outdated values.”

If you’re one of the people that is still not convinced that walking away is a strictly business decision in which ethics and morals should not even enter the conversation, allow me to point you toward an excellent pair of recent papers by Brent T. White, legal professor at the University of Arizona: “Underwater and Not Walking Away: Shame, Fear and the Social Management of the Housing Crisis” and “Beyond Guilt in the Housing Crisis: The Morality of Strategic Default.”

Here’s a particularly compelling passage from the second paper that specifically addresses the lack of any moral component in the decision to walk away:

Think of it this way: when you got your cell phone, you likely signed a contract with your carrier in which you “promised” to pay a set monthly payment for two years. Let’s say, though, that two months after you sign your contract, the price of cell phone service drops by half – meaning that the same cell phone service you pay $100 a month for could be had for half of that with another carrier. You decide that you would be financially better off paying the early termination fee of $300, rather $100 a month for another 22 months for the same service that you can now get for $50.

Would it be immoral for you to break your contractual “promise” to pay $100 for two years, and elect instead to pay the early termination fee? Of course not. The option to breach your “promise” to pay is part of the contract, as is the consequence of breach – a $300 early termination fee. There is absolutely nothing immoral about exercising your option to breach, and you’d be financially wise to do so.

In other words, the lender has contemplated in advance that the mortgagor might be unable or unwilling to continue making payments on his mortgage at some point and has decided in advance what fair compensation to the lender would be. The lender then wrote that compensation into the contract. Specifically, the lender probably included clauses in the contract providing that the lender may foreclose on the property, keep any payments that have been made, and may opt to pursue a deficiency judgment against the mortgagor, if state law so allows.

By writing this penalty into the contract, and then signing the contract, the lender has agreed to accept the property, and (in most states) the option to pursue a deficiency judgment, in lieu of payment. Of course, even in states where they can, lenders frequently don’t pursue borrowers for deficiency judgments because it’s often not economically worthwhile to do so.

Nevertheless, that’s the agreement. No one forced the lender to sign that contract. Indeed, they wrote it. And, to be sure, the lender wouldn’t hesitate to exercise their right to take a person’s house if it was in their financial interest to do so. Concerns of morality or social responsibility wouldn’t be part of the equation.

In short, as far as the law is concerned, choosing to exercise the default option in a mortgage contract is no more immoral than choosing to cancel a cell phone contract. The borrower just has to be willing to accept the consequences – which, in the case of a mortgage contract, typically include being subject to foreclosure and, in most states, the risk of a deficiency judgment.

Banks and corporations like Beacon Capital Partners understand what Mr. White is talking about here, that a mortgage is merely a legal contract, not some sort of sacred vow. They will continue to do what is in their best financial interests, and you should too.

If you find yourself in a situation where you have run the numbers every way you can and the best decision for your family’s financial future is to walk away from your mortgage, don’t let a misguided sense of ethics lead you to the wrong decision. Continuing to pay a mortgage that is hopelessly underwater is throwing good money after bad. If you already made the mistake of buying a massively overpriced house, that doesn’t mean you need to continue paying for that mistake for the next twenty years when there exists a way out.

Please note that this post is absolutely not intended to be legal advice. If you are considering walking away, it is imperative that you seek experienced legal council that can fully explain the legal ramifications of strategic default in your specific state or municipality.

It has been a couple of years since we last ran a poll on this subject, so here’s a new poll:

Should ethics/morals come into play when deciding whether to walk away from a mortgage?

[Continue Reading – Part 2: Did Banks Act in Good Faith During the Bubble?]