I recently finished an analysis of public records in Snohomish County in which I pulled up every single Trustee Deed (i.e. – bank foreclosure) issued by a particular bank over roughly the past year (June ’09 – May ’10). The bank in question is one of the top twenty largest banks in the country (ranked by total assets), but is not among the top 5 (Chase, BofA, Citi, Wells, & US).

I thought the results were somewhat interesting, and might be useful for anyone who is considering doing some shopping for a bank-owned home.

Here’s a chart of the percentage loss the bank has taken on each sold home plotted versus the number of days the bank held the home. 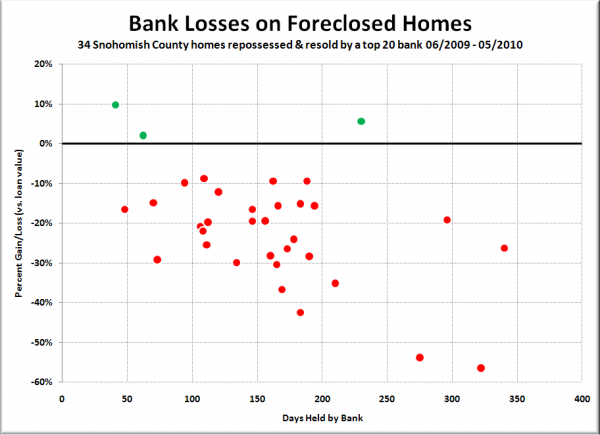 Note that I have excluded one of the sold homes from the above chart as it is an extreme outlier that screws up the scale of the whole chart (loan of less than $60k, home sold for over $200k for a gain of over 200%). The outlier is included in the above summary statistics, however.

Given the Snohomish County population of 711,100 (OFM 04/01/2010 estimate), this one bank has lost $3.63 for every resident in the county in just the last year. If they were to experience that same rate of loss nationwide, they would be looking at a loss of $1.1 billion in 12 months. Ouch.

I had my friend Marc Holmes of WaLaw Realty (real estate lawyers that also provide flat-fee brokerage services for buyers and sellers) take a look at the underlying data for this post. Here are a few of his thoughts:

I’m convinced that maximizing the price is not the bank’s principle objective. It seems that many bank REO employees simply don’t care about selling any given property and I suspect they have relatively little incentive to do a bang up job.

I think your data supports the suspicion that I (and many others) have had for awhile about these huge institutional lenders: they’re overloaded with foreclosures so they just want to get them out the door and will gladly slash their price to do so.

If a house has been on the market for very long at all don’t be afraid to low ball. If it’s brand new to the market and you think it’s priced a little high and you’re willing to gamble a little bit, then just give it a few weeks before making your offer. They’ll be preparing the first price drop by that time and you may be able to beat them to the punch and, if you’re lucky, they’ll decide to just accept your low ball or counter it in hopes of bringing you up a little bit.

Marc also noted regarding my chart of bank losses that:

Some of these houses had second mortgages on them so the total loss for all the lenders involved was frequently even greater than what you have listed. Ouch.

Based on Marc’s observations, here are some errors banks tend to make in the foreclosure resale process that might allow persistent buyers to find a good deal.

Have you spent some time looking at bank-owned homes, or maybe even made an offer on one? Let’s hear your experience. What advice would you give to someone shopping that subsection of the housing market?