Okay, I’ve got good news and some bad news for you. The good news is that the NWMLS did in fact release their monthly statistics today, as I expected they would. The bad news is that the data they published this month is highly suspect. In fact, I’m going to step out and go so far as to say that their published sale counts for July are flat out bogus.

If I’m going to make such a strong claim, I’d better back it up with some data, right? Well here you go.

For the last six months or so, I’ve been pulling down every single-family home sale record available via Redfin’s search and saving them into one giant spreadsheet. In case you didn’t know, you can download some fairly detailed closed sales data in csv format right from Redfin’s map. Here’s an example search, similar to the type I am using to pull the data used in this post. This is the same set of data that I used to generate the nifty price histograms in this June post.

Using this method, I was able to pull sold home data dating back through April 2009. Here’s a look at the sale counts from a Redfin sold home search and the monthly NWMLS reports over that time period: 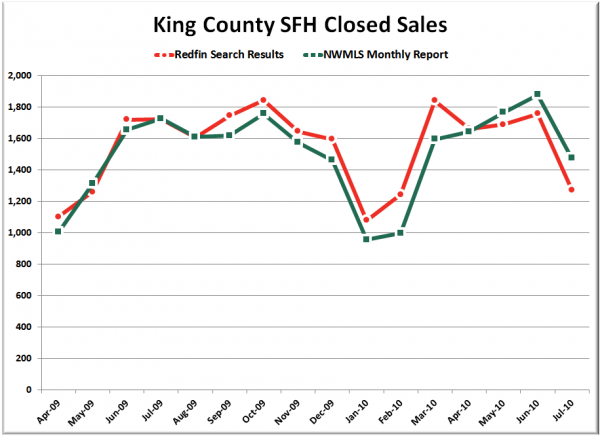 In an average month, I would expect to see the number of sales returning from a Redfin search come in slightly higher than the number reported by the NWMLS, since Redfin gets their records not only from the MLS, but also from the public records (which capture FSBO sales and other off-market transactions). This has been the case most of the months between April 2009 and March 2010.

However, something odd seems to be happening after March. In April, the number of sales being reported by the NWMLS came in almost exactly inline with Redfin’s search results, dropping from 15% over in March to just 1% over in April. Then in May, the relationship swapped, with the NWMLS reporting 5% more sales. In June, 7% more sales. In July, 16% more.

Here’s what it looks like when we just chart the difference between the number of King County SFH sales returned by a Redfin search and the number reported by the NWMLS: 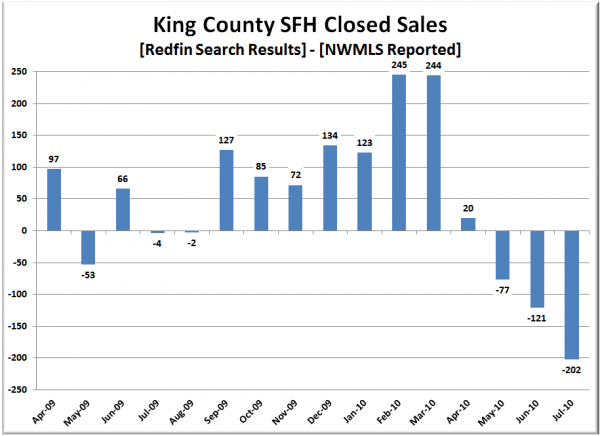 Note the dramatic trend of increasingly negative numbers since May. I have done some spot-checking of other counties and condo data as well, and they all show similar trends.

Before I jumped on the NWMLS for reporting bogus data, I wanted to double-check the results I was getting from my Redfin searches. So, I got on the phone with one of our Seattle Bubble regulars who happens to be a local real estate agent with NWMLS access. My friend did a search for me on the internal NWMLS system of all single-family homes sold in King County during July.

While this month’s report from the NWMLS claims there were 1,474 single-family homes closed in King County in July (click “Current Recap” in the upper-right and scroll to page 2), the NWMLS’ own system returns only 1,253 search results for that same query.

Here’s a plot of NWMLS-reported closed SFH sales in King County, with pending sales overlaid on a different scale and shifted two months to the right for reference, and both versions of NWMLS data plotted for July: 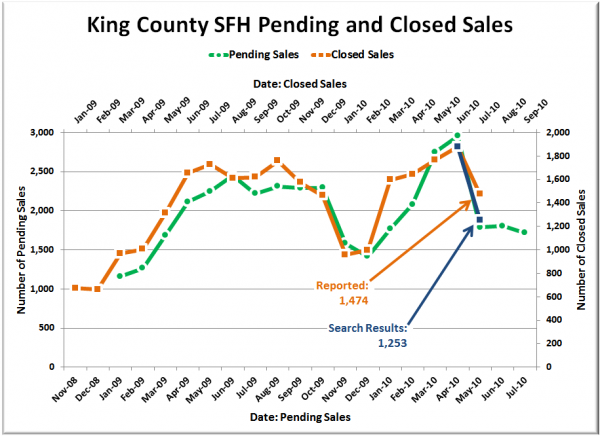 As one final sanity check, I compared the NWMLS SFH sold data with the King County Warranty Deed data I report on every month in our stats preview posts. In the chart below you can see the percentage difference between Warranty Deeds and NWMLS-reported SFH closed sales, with data based on the alternate number reported by NWMLS’ internal system shown in red. 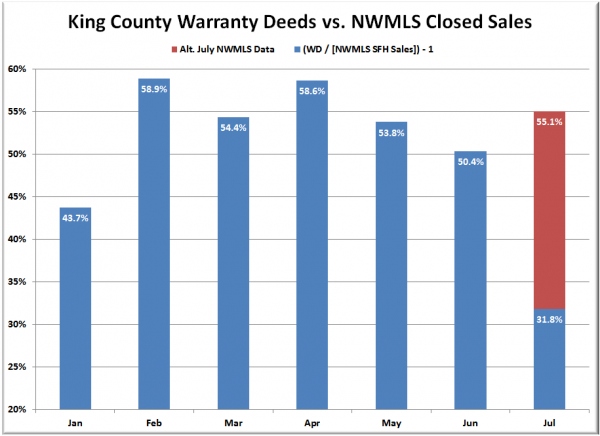 Interestingly, as you can see in the second chart above, the NWMLS-reported sales counts really began to smell fishy with the May data. This just happens to coincide with a major “technology upgrade” of the back-end system the NWMLS uses to track all of its data. A technology upgrade that led to all sorts of problems spanning weeks.

My working theory at this point is that the NWMLS is not intentionally publishing deceptive, incorrect data, but something has gone wrong with the way the NWMLS is pulling their monthly statistics from their new system. Whatever the problem is, it appears to be resulting in some sort of cumulative error that is amplifying the problem each month.

Until this issue is resolved, I’m afraid I will not be able to trust the NWMLS data enough to continue publishing the usual monthly stats charts based on their numbers. Hopefully they will discover the problem soon and return their systems to normal functioning order.

Note: The Tim is employed by Redfin. However, no proprietary Redfin data or special Redfin access was used in this post.