Foreclosure-tracking company RealtyTrac released their third quarter report yesterday, which included a ranking of major metro areas around the country by their respective rates of increase in foreclosure activity compared to the third quarter of 2009.

With a 71% year-over-year increase in RealtyTrac’s report, the Seattle area ranked #1 as the metro where foreclosures increased the fastest. Obviously, this sent the local media into a frenzy, running stories with startling headlines like these:

Of course, as any regular reader of Seattle Bubble is no doubt aware, RealtyTrac’s eye-popping headline number leaves out an important piece of the puzzle: SB 5810.

SB 5810 is a law that was passed by the Washington State Legislator in April 2009 that basically added some additional red tape and an extra 30 days to the process that banks must follow when repossessing a home through foreclosure.

As we discussed at the time, the result of SB 5810 was a massive spike in foreclosures in the first half of 2009 as banks rushed to “beat the clock,” then a subsequent lull in the third and fourth quarter as the local foreclosure pipeline slowly filled back up.

Here’s a quarter-by-quarter chart of Seattle-area foreclosures that I produce for Sound Housing Quarterly that graphically illustrates the effect of SB 5810. 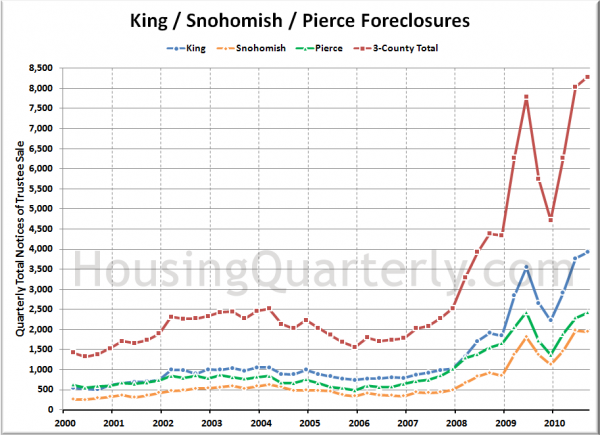 Comparing the third quarter 2010 to the third quarter 2009 is obviously going to give you a distorted view of what is really happening with foreclosures. While they are clearly on the rise here in Seattle, the true increase is nowhere near as dramatic as RealtyTrac’s report implies.

There was one local news outlet that avoided the urge to turn RealtyTrac’s data into an attention-grabbing—but misleading—headline. KUOW (94.9 FM) contacted me yesterday morning to get my take on the data, and allowed me to explain the effect of SB 5810 on the year-over-year numbers on the air.

Here’s the audio from my appearance yesterday on KUOW’s “The Conversation”:

KIRO 7 TV also contacted me yesterday morning, and I provided a concise explanation of the effects of last year’s legislation in a pre-recorded session for them, but they cut that part out and focused on the sensationalism instead. *sigh*

[Update: KIRO filed a DMCA takedown notice on the video. Classy. I’ve filed a counter-notice that gives them 14 days to either sue me or YouTube puts the clip back up. In the meantime, enjoy this clip instead.]

[Update 2: The original video is back up on YouTube. Thankfully it appears that KIRO has decided not to sue me for giving them free material followed by free promotion. Thanks, KIRO!]