There has been a lot of buzz in the local real estate scene recently after Olive 8 announced their “reset” marketing strategy for 2011, following the developer’s switch from Coldwell Banker Bain to Realogics just before Christmas.

One of the cornerstones of the campaign appears to be the “Reset at Olive 8” video at right that was posted on their site last week.

The MC in the video is one Tom Kelly, billed as a “Nationally Syndicated Columnist, Author.” He proclaims that “things are looking up,” and closes with the declaration that “We’ve all said to ourselves, ‘I wish I would have bought when I had the opportunity.’ Well, I think we’re gonna be saying that again.”

If we’re going to listen to advice about the future from someone, I think it’s instructive to look at some of their past advice to see what kind of track record they have. So what’s Tom Kelly’s record? Surprise! He’s been saying “buy, buy, buy” consistently since 2005.

October 2005: “…the reality of a significant drop in home prices and a rise in inventory is rather remote.”
October 2006: “local prices are not headed backward or even close to a ‘soft landing.’ …the down period in the Puget Sound will mean slower, not negative, appreciation.”

Given that the point of the video is to sell you on the idea of buying a very expensive luxury condo, it’s full of all kinds of other dramatic claims about the downtown housing market, including Dick Hedreen (CEO of RC Hedreen, the Olive 8 developer) boldly predicting that “there will be a housing shortage in downtown Seattle.” Of course, none of these claims are backed up with any hard data.

Over at Urbnlivn, Matt posted the new “reset” pricing yesterday, and to be honest, I don’t see anything to get excited about. I spent a little time going through the King County Records for Olive 8 to pull up the sale prices of comparable units that have already sold. Here’s what I found: 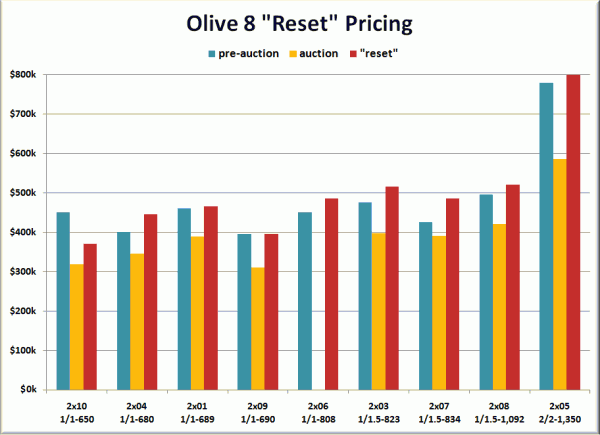 Apparently the developer really believes the rah-rah sales-speak in the video, if they’re asking 25% over the proven open market value of the units that just sold. Plus, according to Matt’s take, “it sounds like they’re not going to budge much on pricing now that they’ve reset.”

Good luck with that. Olive 8 may indeed have “25% of all new condominium inventory in downtown Seattle,” but that doesn’t mean much if the demand for brand new luxury condos is tapped out.