Rather than playing the usual game of scraping and searching through the local papers for notable prognosticators going on the record with someone else about what’s ahead in 2011, I decided this year to go straight to the sources myself. I directly contacted three gentlemen who are plugged in to the market and whose opinions I respect: Glenn Kelman, Stan Humphries, and Glenn Crellin. All three of them were gracious enough and bold enough to respond.

Before we get to the 2011 predictions though, let’s have a quick look back and see how our 2010 contenders fared.

As you may recall from last year’s post, most of the usual suspects pretty much avoided making any guesses about what was in store for 2010. Only Steve Tytler and I were willing to go out on a limb with predictions. Steve had prices down “about 5 percent,” and I guessed that barring additional government intervention, “most” of a 10% drop would come in 2010.

Here’s where prices went in 2010, according to four measures:

Both Steve and I were off on our guesses if you use the change in the straight-up median between Decembers. Other measures came in right around the 5% to 10% range we were expecting. I think it’s fair to call this one a tie on price.

A far as I am aware, I’m the only one who made any predictions for sales or inventory in 2010. My guess was sales up 1st half, flat 2nd half. I got the first part right, but was overly optimistic on the second half, as sales actually crumbled quite dramatically once the tax credit went away. Inventory stayed slightly ahead of 2009 for most of 2010, so my call of “flat to down slightly” was also off a bit. On the whole, my sales and inventory predictions were slightly too optimistic.

The Contenders Take On 2011

Let’s have a look at the 2011 predictions from our panel. I asked each of them for a prediction on price, sales volume, and inventory, as well as their general thoughts on the market.

First up is Glenn Crellin, the director of the Washington Center for Real Estate Research over at WSU. Glenn and I disagreed about the direction the market was heading in 2006 and 2007, but we are largely on the same page these days.

Obviously the key to stabilization of the housing market is job creation, and that’s still a problem. Additional private sector jobs need to increase rapidly because state and local budgets are going to be shedding jobs throughout the state throughout 2011. This will keep demand low, and the added pressure of additional foreclosures will add to the downward pressure on prices. My casual expectation is for an aggregate price decline of about an additional 5% on the median. That means that potential buyers have missed the biggest bargains since mortgage rates are already rising, and a 1% rise in rates would require nearly at 10% reduction in prices to keep payments as low as they would have been to purchase late last year with the record-low mortgage rates.

On the sales side, like most economists I prefer to look at seasonally adjusted annual rate data, and that rate dropped very close to its early 2009 low during the third quarter. It will probably remain well below the levels of a year ago through mid-year 2011, but I do not expect significant quarter-to-quarter declines. Presuming the economic recovery continues, I anticipate gradual improvement in home sales, especially during the second half of 2011. The real key is how lenders behave. What will they require in terms of down payments? What will be their credit score threshold?

I don’t see potential sellers (except distressed sellers and financial institutions) rushing to put homes on the market, so I do not anticipate significant increases (or decreases) in properties available for sale compared to year-ago levels.

As I often say when I am making presentations, the crystal ball is cloudy.

I’ll put Glenn C. down for -5% on price, mostly flat sales and inventory for the year.

Next we have Stan Humphries, Zillow’s Chief Economist. Stan gets paid to spend all his time digging into housing market data. He slices it, he dices it, and he regularly cooks up a delicious filet of fresh insights. Here’s his take on where Seattle is headed in 2011:

For King County SFH closed sales, I estimate we’ll top out monthly sales in the summer time of 2011 at about 1,500-1,750 units. That largely discounts the mid-2009 to mid-2010 trends because of the Federal tax credit. We’ll get the higher number if the anticipated further local price declines coupled with an improving national economy and increasing mortgage rates get people thinking about value shopping versus keeping them on the fence fearing the purchase of a depreciating asset. We’ll get the lower number if fence-sitting is the dominant behavior prompted by the further price declines.

Foreclosures will continue to increase in our market next year, likely peaking in the back half of the year at around 2 out of every 1,000 homes being liquidated each month (current rate in November is 1.3 per 1,000 homes).

Let’s hear from Glen Kelman (my boss). As CEO of Redfin, Glenn is in a unique position. He not only has his finger on the pulse of data coursing through Redfin’s vast databases, but he also has a direct line to hundreds of “boots on the ground” as Redfin’s agents in Seattle (and around the country) share what they’re seeing in home tours and in deals.

The data are so mixed just now—and the whole real estate market is so closely tied up with the overall economy—that this exercise is, at least for a guy of my talents, a crapshoot. I also feel a little wary of predicting any outcome better than the apocalypse just because so many people expect anyone in the industry to be totally full of it, but here’s my best guess (anyone who pretends he’s not guessing is full of it.)

In Seattle, we believe that limited inventory, not demand, is the gating factor in sales volume, which will be 10% lower than in 2010, almost entirely due to a slow January, February and March. Nationally, we actually expect the economy to improve a bit as rising corporate earnings slowly bolster consumer confidence and probably even employment. With Seattle sellers holding out for better prices and buyers becoming impatient, prices will stabilize: the broader Seattle area may decline by 2% – 4%, driven in part by increasing short-sale liquidity and in part by the momentum created by buyers and sellers accustomed to falling prices, but the core Seattle and Eastside neighborhoods are not going down right now, and probably won’t all year.

I was hoping that I might be able to report that we had finally reached the elusive “bottom” of the housing market by now, but we are not there yet. I think we are in for another year of slowly falling prices next year. I do not expect a dramatic crash in home prices, but I think there’s a good chance that home prices will continue to drift downward by an average about 5 percent. But again, home price appreciation/depreciation will vary widely from neighborhood to neighborhood with some doing much better and some doing much worse than the overall average.

The only problem is that despite historically low mortgage rates, not many people seem to be interested in buying homes right now. So an increasing supply of homes for sale combined with weak buyer demand indicates that home prices are likely to continue dropping until they get low enough to attract more buyers.

Again, I don’t want homeowners to panic. I don’t think we will have a 15 to 20 percent “crash” in home prices in 2011, I just think that the housing market will be “flat” with a slightly downward trend. 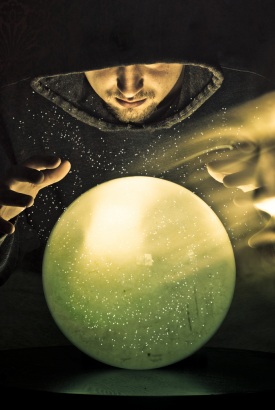 The consensus among this year’s forecast guessing contest contributors is remarkably unified. Everyone seems to be expecting about a 5% drop in price and a decrease in sales.

For the most part, I agree with these guesses. I’m expecting prices to fall another five to ten percent in 2011, mostly closing the remaining gap between incomes and home prices. Price drops will probably be more severe in the further-out suburbs and rural areas, and much less pronounced in the close-in areas.

On sales and inventory I’m actually slightly more bullish for 2011 than the panel. I expect sales to come in between 5% and 10% higher than 2010, as the “borrowed sales” pulled forward by the tax credit have mostly been made up, and continued price declines draw people in to purchase now-affordable homes in neighborhoods that were previously out of reach. Inventory is already showing a clear slowdown, and I expect this to continue through most of the year as people who don’t need to sell just sit out the market. I expect that by this time next year active inventory will be at least 10% lower.

“But wait,” you say. “If sales are increasing and inventory is dropping, won’t that drive prices up?” Good question. Simple supply and demand would suggest that increasing demand coupled with decreasing supply should drive prices up. However, as we have seen, the housing market reacts very slowly to changing supply and demand. By the time prices peaked in July 2007, we had seen twenty-one consecutive months of year-over-year sales drops, and sixteen consecutive months of year-over-year increases in inventory. If YOY sales went positive in January, and we see a similar pattern as we did leading up to the peak, prices would not start to increase until late 2012.

Well, that’s pretty much all I’ve got to say on the matter. Let’s hear your predictions in the comments, as well as in this poll: