It is time once again for our annual predictions post, where your host goes on record with crazy shots in the dark about what might happen in the Seattle real estate market over the next calendar year. For those of you following along with this game at home, here are the predictions of record for the past three years: 2007, 2008, & 2009.

This year’s winner for the closest prediction is Steve Tytler, whose guesses have consistently been the closest of anyone actually in the industry. My price guess looks like it will probably end up being the closest if you use Seattle’s Case-Shiller data (October was down 12.4%), but to be fair and consistent, we’re sticking with the NWMLS median, so Steve gets the prize this year.

Here is the text of my predictions on inventory, sales, and prices last year:

My guess is that inventory in 2009 will be flat to slightly down from 2008 for most of the year. I am betting that the double-digit YOY drops in sales will not last beyond the first or second quarter, but will eventually flatten out and maybe even show YOY gains.
…
As far as a specific prediction on prices, my guess is about another 10 percent drop in 2009, which would put December 2009’s median at $363,150.

Inventory did indeed end the year down, and sales showed YOY gains. Overall, my biggest shortcoming was in failing to foresee the February implementation of the $8,000 tax credit, which clearly provided a short-term boost to the market.

…the real estate “market” is now as much a political entity as it is an economic entity. The government has gone to amazing levels of effort to prop up the housing market. …huge amounts of money are being borrowed or simply created out of thin air and shunted directly into the housing market through multiple channels. Even as demand is thus boosted, supply is being constrained by foreclosure moratoria and opaque and arbitrary financial industry bailouts.

The net effect is that government intervention is exerting an enormous influence on the housing market. So one can’t just look at fundamentals as in the good old days. Instead, one is forced to practice a sort of real estate Kremlinology in an attempt to figure out how fiscal and monetary policy will affect, or cease to affect, the market.

Looking Back at Where We Have Been
Of course, it’s still fun to make wild guesses, even if we don’t know what the government will pull out of their future taxpayer-funded hat next. But before we get to this year’s predictions, I thought it might be informative to drop a few charts. The following three charts go back through 1993, which is as far back as I have been able to locate consistent NWMLS data on home prices. 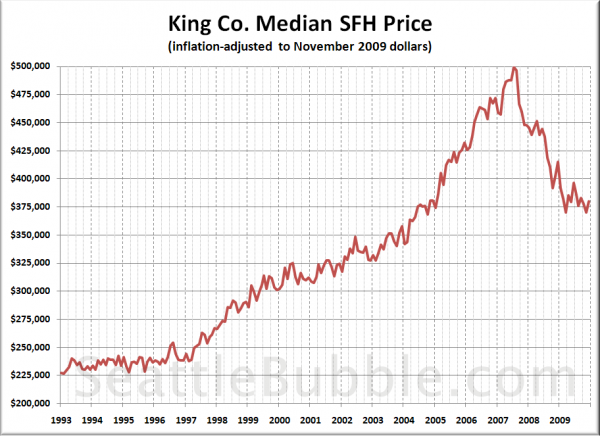 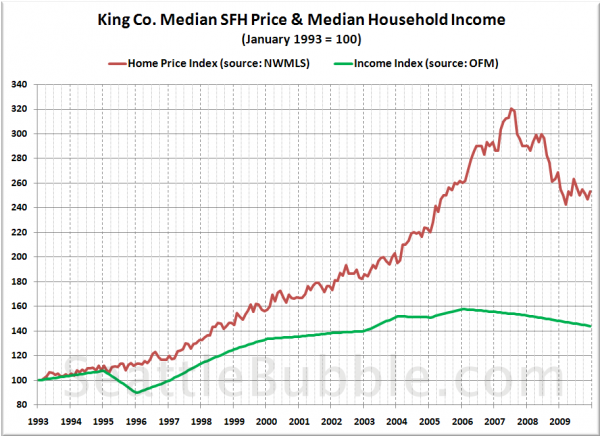 Something still seems a bit, shall we say, off about that. Lastly, here is King County’s affordability index: 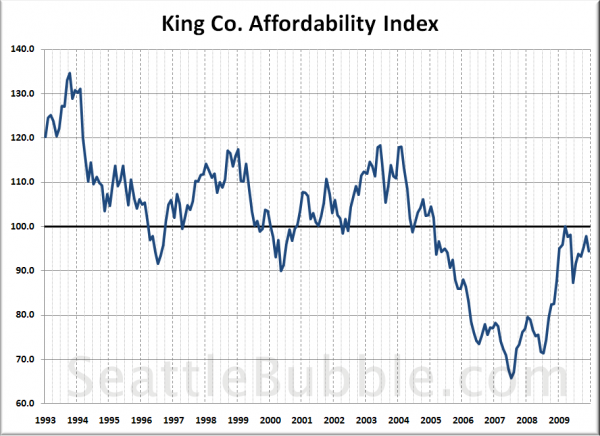 Definitely an improvement there, but a lot of what is keeping that above 90 is the crazy low interest rates, being held there thanks to the government. See above.

The Crystal Ball Gets Murky
So, let’s see what predictions we can find from the usual suspects for 2010.

Oddly enough, it seems that fewer and fewer local real estate professionals are willing to step out on a limb with predictions. The only article I was able to find that referenced 2010 and quoted Gardner, Crellin, and Scott was Eric Pryne’s piece in the Times: Tax credit fuels home-sales bounce, but will it be just a blip?.

Here’s all those three had to say in that article:

“It worked,” Lennox Scott, chairman and CEO of John L. Scott Real Estate, said at a recent industry forum. “That’s what completely activated the market.”
…
After plummeting 20 percent in 18 months from its summer 2007 peak, the median price of a single-family home sold in King County slipped only slightly more in 2009.
…
And next year? “They’re not going to go up,” Jill Wood, Windermere Real Estate president, said of home prices. “They’ve probably leveled off for now.”

Even that assessment may be optimistic, others say. Glenn Crellin, director of the Washington Center for Real Estate Research at Washington State University, said it’s more likely that prices will continue to decline through midyear.
…
The question now is, how many prospective buyers remain? “Were we stealing future demand?” Seattle land-use economist Matthew Gardner asked at a recent forum.

So we’ve got no prediction from Scott, an ambiguous forecast of a decline from Crellin, and a question from Gardner that he likely already knows the answer to. We did also get a bonus forecast from Jill Wood of prices having “leveled off.”

Will we hit the housing market bottom in 2010? Maybe. You can only know for sure that a market has bottomed in retrospect when you can look back at housing prices on a graph and see the point where they stopped going down and started going up and stayed up. We may very well hit that point some time next year, probably late spring or summer.

Kudos to Steve for still being willing to stick his neck out there.

The Tim on 2010
So finally we get to my predictions for the coming year. Keeping in mind that unknown future government meddling will probably throw off any guesses I make today, my outlook for 2010 is pretty similar to what I saw for 2009. I don’t think Seattle home prices have bottomed yet. If allowed to adjust to market fundamentals, they’ve probably got at least another 10% to fall, maybe a bit more. I would expect most of that to come this year.

Barring any additional free money giveaways, sales will probably show YOY gains during the first part of the year, and be more or less flat for the second half. I suspect that interest rates will rise, possibly up into the sixes, which when combined with the borrowed sales thanks to the tax credit, will end up supressing sales as the year winds down. Inventory will probably be flat to down slightly.

There you have it, The Tim on record for 2010. Now lets’ hear your predictions in the comments, as well as in this poll: