Happy Case-Shiller day, everybody. Yes, it’s time once again for us to take a look at the latest data from the Case-Shiller Home Price Index. According to March data, Seattle home prices were:

Last year prices also rose 0.1% from February to January, while year-over-year prices were down just 3.6%.

Pretty much the exact same seasonal bump that we saw last year at this time. If we see the same sort of action this year over the next few months, we can expect to see the index rise a few percent before flatlining again and resuming the decline in August. That sounds like a fairly likely outcome, although I expect the bump and subsequent decline to both be smaller this year than last.

Still only one city in positive YOY territory: Washington DC.

In March, fifteen of the twenty Case-Shiller-tracked cities experienced smaller year-over-year drops (or saw year-over-year increases) than Seattle (one less than February):

Falling faster than Seattle as of February: Portland, Chicago, Phoenix, and Minneapolis.

Twelve of the twenty cities tracked by Case-Shiller hit new post-peak lows in March, as did the 20-city Composite index. 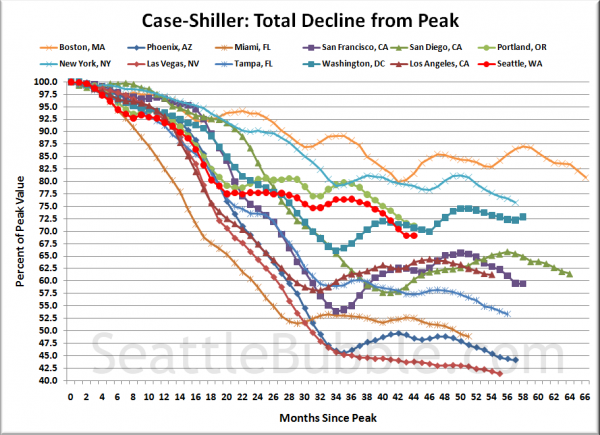 In the forty-four months since the price peak in Seattle prices have declined 30.9%, basically exactly where they were last month. 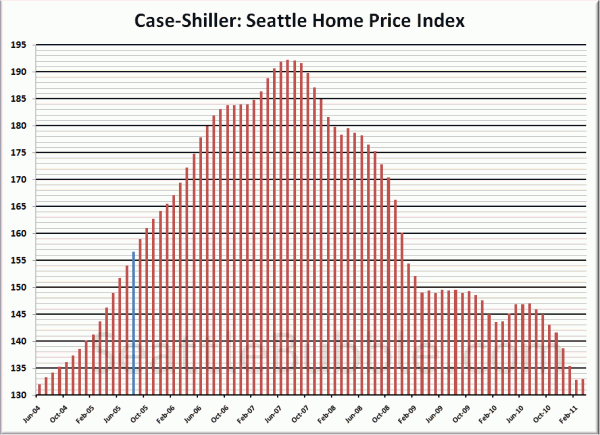 The blue line on August 2005 represents the month that this site launched. As of March 2011, there have effectively been zero price gains since June 2004.

For posterity, here’s our offset graph—the same graph we post every month—with L.A. & San Diego time-shifted from Seattle & Portland by 17 months. All four cities fell yet again in December. Year-over-year, Portland came in at -7.6%, Los Angeles at -1.7%, and San Diego at -4.0%. That’s quite the sudden divergence between LA and San Diego. 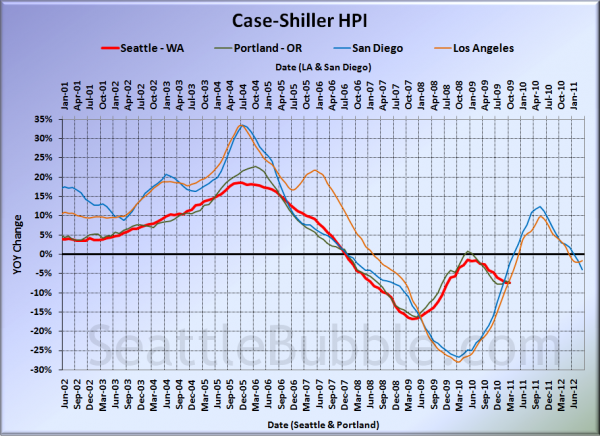