One of the questions I’ve seen a few people ask about my home search is something to the effect of “how did you decide to buy in Everett?” In today’s post I’ll answer the question a little more broadly by describing our general method for deciding what was important to us, what wasn’t, and how we analyzed all of the various neighborhood options, eventually narrowing it down to the area around downtown Everett.

When we first started our search we were focused almost exclusively on rural homes with modest acreage. The first home we toured when we reactivated our serious search in February 2010 was on 1.3 acres out in Clearview. We came close to buying that one in October, but after we called it off and we weren’t finding many other good rural acrage prospects, we decided to spend some more time analyzing our priorities to see if there might be other types of properties that would satisfy us just as much as a rural home on acreage.

To kick off this process, we basically made a big wish list, based on how we live our lives today and how we’d like to live our lives in the future. This list included things like acreage and garden space, but also things like being walkable to shops and having interesting architecture in the neighborhood—things that rural acreage was unlikely to have but that we enjoyed in our existing rental neighborhood.

[Edit]
Since a number of people have brought this up, I would like to clarify a step that was implicit in the above description. Before we even got to the “wish list” stage, we considered certain “deal breakers” that would cause a neighborhood to be eliminated from our list without even making it into consideration. Examples of such deal breakers for us include a commute in excess of an hour by bus or more than twenty minutes (in traffic) by car, a level of crime above a certain threshold, or areas that were more than twenty to thirty minutes from where all our friends live. Any area that failed any of those types of tests was eliminated right from the start.
[End of Edit]

The next step was to assign a priority to each item on the wish list. We used a simple 1 to 3 scale, where 3 is most important and 1 is more of a “it would be nice, but we could easily live without it.” Then it was table time. We originally wrote it all out on a whiteboard, starting out by just comparing generic “rural acreage” with a generic “city neighborhood.” As it turned out, the resulting scores were a dead tie.

We had mathematically proven (based on the information available to us at that time) that we would be just as satisfied living in a city neighborhood as we would be living on rural acreage. Once we had established that notion, we opened up the competition to specific neighborhoods for comparison. As you can probably guess, we eventually ended up in Excel. Here’s a peek at what the comparision looked like after a few revisions (note that the “<5 mi” in column M is five miles not five minutes): 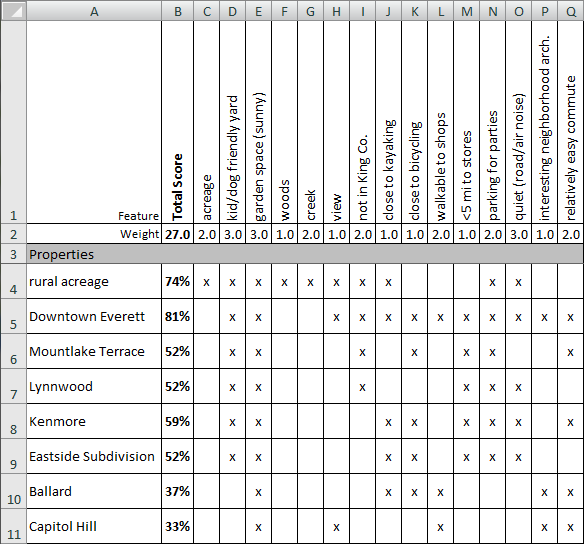 Since we weren’t comparing specific properties at this point, an “x” in a given column doesn’t indicate that every home in the listed region has that attribute, but rather that it’s likely that a home in that region could have that attribute. As you can see, Downtown Everett came out on top, so while we didn’t stop looking in other areas, we focused our most of our intensive efforts on Everett.

You may notice a few things that aren’t on our table that many other home searchers have near the top of of their lists. One is “good schools.” Frankly, based on my personal experience in Washington’s public school system, I feel like even the “good” public schools are mostly a joke (I hope to send my kids to a private school), and good parenting is many times more important than good schools anyway. The other missing item is “few sex offenders,” but I have a lot to say about that subject, so let’s save our discussion on that one for a later post I’m planning where we can dive into that conversation exclusively. [Update: Here is that post – The Sex Offender Bogeyman]

So how do you narrow your home search? Or did you—maybe you prefer the shotgun method, looking at homes all across the greater Seattle area? Let’s hear it!