A few readers who have been flying recently pointed me toward a delightful magazine publication that apparently graces seat-back pouches on Alaska Air planes, providing otherwise entertainment-free flyers with something to do.

Unfortunately, it seems that someone in the editing department mis-labled the “Humor” section of the magazine as “Real Estate.” Consider the following excerpts from the article entitled “Buyer’s Market” (which begins on page 77): 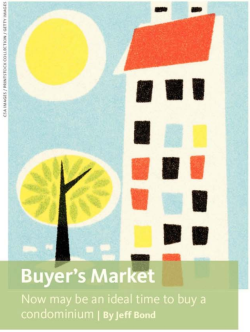 San Diego resident Matt Scharkozy is trying to relieve a seven-year itch. After spending that much time renting a home in th Southern California city he has grown to love, the telecommunications salesman and Pennsylvania native decided last summer to take the plunge and buy a condominium.
…
Some might think Scharkozy is taking a risk buying a home in this time of economic uncertainty. But he, and others like him, may accomplish the ultimate goal for many in real estate: buying at or near the bottom of the housing market.

Some real estate experts are predicting that, barring a double-dip recession or an unforeseen crisis in Europe or another part of the world (and, yes, those are big “ifs”), 2012 will be the year housing markets start to heal and home prices not only stabilize but maybe even begin to rise.

Yup, now even airlines are getting into the real estate bottom-calling business. Of course, what do you expect when the magazine has been largely funded by builders of brand new condos and houses? Here are a few of the prominent advertisers found inside:

But wait, it gets better!

So where are the best locations to buy a home—places where property values are expected to rise in the coming years? While you might expect cities such as Seattle and San Diego to be on the list, other cities may come as a surprise.

Fiserv’s economic models, which are created using data for single-family homes and condominiums, have identified strong markets throughout the West. Fiserve found that prices in Tacoma, Washington, are expected to increase 24 percent between 2011 and 2013. In fact, Stiff expects that just about any metropolitan area in Washington state—as well as many other cities throughout the western United States—should see home prices rise.

According to Fiserv, the cities of Bend, Oregon, and Carson City, Nevada, both could see home prices spike by 17 percent, while 10 percent gains are expected in Seattle, Tucson and Reno.

You read that right. 10% gains by 2013 in Seattle, 24% in Tacoma. They used economic models, you guys, so obviously you can trust these forecasts to be absolutely accurate.

To wrap things up, enjoy this quote from Julie McAvoy, community sales director at Realogics Sotheby’s International Realty in Seattle (who happens to be handling sales at Olive8):

“I don’t think there has ever been a better time,” McAvoy says about acquiring a condo. “But it has to be for a long-term hold. If you want to buy a place and live in it, I don’t think you can beat this moment.”

Pretty much this exact same article could have been (and basically has been) published in 2008, 2009, and 2010. According to the people who make money selling homes, sudden recovery and price growth has been just around the corner ever since home prices first started falling here in the Seattle area in late 2007. Newsflash: That is not going to happen. We’re in for a long slog of flat to slightly declining prices. Deal with it.

In case the online version of the magazine is taken down, I have generated a pdf excerpt of the cover, table of contents, and the real estate section for your enjoyment.